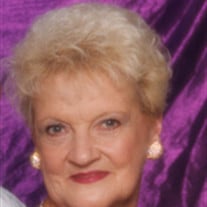 Winona Lowe Langston, age 81, of Johnson City, entered into her Heavenly home on Saturday, July 25, 2015 at the residence of her daughter, Marie, and was reunited with the love of her life, Bobbie Langston, who passed away in August of 1999. A lifelong native of Johnson City, she was a daughter of the late A.R and Lillie Troutman. Mrs. Langston was a graduate of Science Hill High School and was a Licensed Practical Nurse. She was an active member of Austin Springs United Methodist Church, where she stayed active with various Bible Study Groups. Mrs. Langston was a charter member of the Johnson City Grand Squares. She and her husband would travel all over the Eastern United States competing in various competitions. She and her husband enjoyed traveling, having the opportunity to visit places such as Hawaii and the Bahamas. In addition to her parents, Mrs. Langston was preceded in death by her husband, Bobbie C. Langston in August of 1999, and a sister, Georgie Phillips. Survivors include two daughters, Marie Hughes and husband Dennis, Patricia Nelson and husband Lewis, all of Johnson City; two grandchildren, Meta "Nikie" Nelson, Johnson City, and Marshall Nelson and wife Nelson, Knoxville. Several nieces and nephews also survive. The funeral service for Mrs. Langston will be conducted at 7:00 P.M. Monday, July 27, 2015 in the East Chapel of Appalachian Funeral Home with Rev. Anthony Mills and Rev. Rex Hill officiating. Music will be under the direction of Jack and Betsy Ollis and Bess Ricker. The family will receive friends Monday from 6:00 until 7:00 P.M. in the East Parlor of the funeral home. The graveside service and interment will be conducted on Tuesday, July 28 at 2:30 P.M. from the Mountain Home National Cemetery, Mountain Home, Tennessee. Active pallbearers will be, Zachary Mills, Mike Moncier, Dan Kane, James Buster Hodge, Andy Blankenship, and Jack Ollis. Those who wish to attend the graveside service are asked to meet at the funeral home at 2:15 to travel in procession to the cemetery. In lieu of flowers, the family has requested memorial contributions be made to the Austin Springs United Methodist Church, the Diabetes Foundation, or the Kidney foundation. The family would like to offer a very special thank you to Annie Hughes for all of her special love and care. Also a special thanks to the nurses and staff of the Mountain States Hospice for their special care of Mrs. Langston. Memories and condolences may be shared with the family at www.appfh.net. Appalachian Funeral Home and Cremation Service, 800 E. Watauga Ave., Johnson City, is serving the Langston family. (423) 928-6111. Order Flowers Service DetailsMonday, July 27th, 2015 7:00pm, Appalachian Funeral Home- East Chapel Interment DetailsMountain Home National Cemetery

Winona Lowe Langston, age 81, of Johnson City, entered into her Heavenly home on Saturday, July 25, 2015 at the residence of her daughter, Marie, and was reunited with the love of her life, Bobbie Langston, who passed away in August of 1999.... View Obituary & Service Information

The family of Winona Lowe (Troutman) Langston created this Life Tributes page to make it easy to share your memories.

Winona Lowe Langston, age 81, of Johnson City, entered into her...