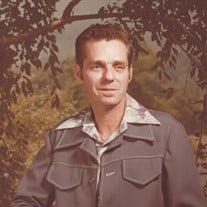 William “Bill” Joseph Jackson, 81, of Johnson City, passed away at his residence on Wednesday, May 9, 2018. He was born November 7, 1936 in Johnson City and was the son of the late James F. and Myrtle Garland Jackson. Bill was a graduate of Science Hill High School and served his country in the United States Army from 1959 to 1962.  Mr. Jackson was a member of Moose Lodge #778 in Elyria, Ohio for 31 years.  He retired from General Motors after 43 years in Cleveland, OH and Elyria, OH. Survivors include his wife of 56 years, Janice McKinney Jackson; sister and her husband, Brenda and Gary Gentry of Johnson City; brother and sister in law, Rick and Brenda Jackson of Knoxville, brother, Bob Jackson of Reno, Nevada; brother and sister in law, Jim and Jean Jackson of Lake Placid, Florida.  He is also survived by 13 nieces and nephews; 14 great nieces and nephews; 10 great great nieces and nephews. The family will receive friends from 11 A.M.  to 1:00 P.M. on Friday May 11, 2018 in the West Chapel of Appalachian Funeral Home.  Graveside services will be conducted at 1:30 P.M. Friday at Monte Vista Memorial Park with Military Rites being accorded by the Carter County Honor Guard. Honorary Pallbearers will be Danny Carder, Billy McGee, Richard Zoolman, Richard Jackson, Mike McKinney, Ralph Gent, Joe Blevins, Darrell McKinney, Floyd Brown, and Ralph Cook.

The family of William "Bill" Joseph Jackson created this Life Tributes page to make it easy to share your memories.