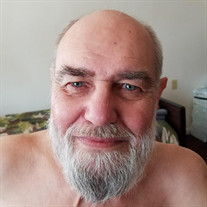 William “Wilbone” Howard Adkins, 69, Johnson City, died Thursday, September 24, 2020, at the Johnson City Medical Center. William was a native of Whipple, WV, and lived throughout the country most of his adult live before moving to East Tennessee. He was a son of the late John and Geraldine Irvin Adkins. In 1970, at age eighteen, William entered the military, serving three combat tours in the Vietnam War, which included Deep Reconnaissance Operations. He served from 1970-78, in the U.S. Army and U.S. Navy as a Military Police Officer, and Special Forces Operations with the U.S. Marine Corp. William formerly worked as a brakeman with Northern Railroad, and for thirty-nine years following his discharge from the military, lived a nomadic lifestyle, drifting about the country, primarily California, working odd-jobs, before coming to Johnson City. He is survived by his sister, Linda Miller, Felton, DE, his caregiver, Earnest Ollivares, Johnson City, and his many friends at the John Sevier Center, where William made his home. The graveside funeral service will be held Wednesday, November 4, 2020, at 1:00 P.M., in Mountain Home National Cemetery Annex. Military honors will be accorded by Rolling Thunder, The Dog Tag Brigade, and Combat Veterans. Those planning to attend are to meet at the cemetery by 12:50 P.M. The V.A. enforces social distancing and requires all attendees wear a mask, those who do not wish to adhere to these guidelines will be asked to remain in their vehicles.

William &#8220;Wilbone&#8221; Howard Adkins, 69, Johnson City, died Thursday, September 24, 2020, at the Johnson City Medical Center. William was a native of Whipple, WV, and lived throughout the country most of his adult live before moving... View Obituary & Service Information

The family of William "Wilbane" Howard Adkins created this Life Tributes page to make it easy to share your memories.