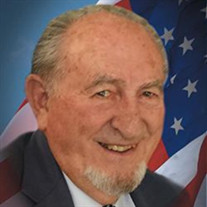 William H. “Bill” Horn – MSgt – US Air Force (retired) It is with great sadness that we announce the passing of Bill Horn on 12/22/20, with his family by his side, at the James H. Quillen Veterans Affairs Medical Center, Mountain Home. Bill was born in Hawkins County, TN 1/22/1934. He is preceded in death by; his father, William R. Horn; his mother, Lorena G. Horn, and two brothers; James V. Horn and William Hanzy “Hank” Horn. He is also preceded in death by; his first wife and mother of his children, Mary Elizabeth Donner Horn; and his second wife, Doris Mae Zeiger Horn. He is survived by his children: son, William “Dave” Horn of Johnson City; daughter, Lynett Douglas (husband, Eddie) of Johnson City; daughter, Donna Horn of Gray. Grandchildren: Clint Douglas (wife, Suzanne) of Johnson City; Tyler Douglas (wife, Erin) of Johnson City; Kasey Duncan (husband, Derek) of Kingsport. Great grandchildren: Kaelyn, Keaton, and Avery Duncan; Emma and Cora Douglas; and Sloane Douglas. Sister: Margaret “Brenda” Charles (husband, Donald) of Leesburg Fl. Brother: Onzy Horn (wife, Jackie) of Church Hill, TN. He is also survived by many caring nieces and nephews, cousins, friends, and neighbors. Deserving special mention is Carolyn Whaley. She was his loving friend and constant companion for the last 15 years. Bill Horn retired from the US Air Force in 1974. He is a veteran of the Vietnam and Korean wars. During his 22 years of military service, he was awarded many medals, including “The Distinguished Flying Cross”. He also participated in more than 150 combat missions while serving in Vietnam. As a flight medic, he considered it a great honor to be the senior medical technician on the first and last flight of “Operation Homecoming” (the return of our Vietnam POWs). Following his military career, Bill then served as the grounds supervisor of Mountain Home National Cemetery in Johnson City, retiring after 21 years. During his 35+ years as a resident of Johnson City, he touched the hearts and lives of many people and will be greatly missed. Bill was a former member of Addilyn United Methodist Church of Bristol, TN. Special thanks to the ER, Recovery Room and ICU staff of the VA hospital. While maintaining absolute professionalism they were also extremely kind and helpful. Memorial donations may be made to your favorite charity. Visitation is at Appalachian Funeral Home, on Wednesday December 30, 2020, beginning at 5:30 pm with a brief service to follow at 7:00. The graveside committal service and burial is on Thursday, December 31, 2020, at 2:00 pm at the Mountain Home National Cemetery Historic Site with the privilege of full military honors from the Shaw Air Force Base (SC) Honor Guard. Those planning to attend are to meet at the cemetery at 1:50 pm. Family and friends planning to attend are to wear a mask or protective face covering, and are to practice appropriate social distancing, at both the funeral home and cemetery.

The family of William "Bill" Horn created this Life Tributes page to make it easy to share your memories.

Send flowers to the Horn family.