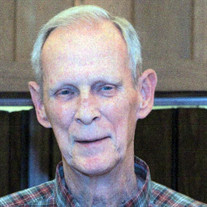 Dr. William P. “Bill” Dotson, Jr., 76, Johnson City, died Tuesday, November 12, 2019, at Franklin Woods Community Hospital, following a lengthy illness. Bill was a native of Jenkins, KY, and a son of the late William Paul Dotson, Sr. and Inez Cleveland Dotson. He was a U.S. Air Force veteran, retiring in 1981 as a Major, following twenty years of service. Bill was a graduate of the University of Missouri, receiving a B.S. Degree in Electrical Engineering, the University of Tennessee Space Institute, receiving a Masters of Science Degree, and the Air Force Institute of Technology, receiving a Doctorate in Philosophy. Following his retirement from the Air Force, he worked with Bell Telephone Lab in New Jersey, Texas Instruments in Johnson City, and then as a Mathematics Professor at East Tennessee State University. Bill was a member of Et Kappa Nu and Tau Beta Pi Fraternal Organizations. He was a pilot and enjoyed flying his own airplane. He is survived by his wife of fifty-seven years, Pat Dotson; daughter, Marie Sepe and husband Don; son, Robert Dotson; grandchildren, Cameron and Allessandra Dotson; brothers, Fred and Ed Dotson; sisters, Cecilia Pippin and Lois Boggs; several nieces and nephews. The funeral service will be held Monday, November 18, 2019, at 1:00 P.M., from the East Chapel of Appalachian Funeral Home. The graveside committal service with full military honors will follow at 2:00 P.M. in Mountain Home National Cemetery. The family will receive friends prior to the service Monday from 12:00 -1:00 P.M. in the East Parlor of the funeral home. Those who prefer to make memorial contributions, please do so to The Southern Appalachian Ronald McDonald House, 418 N. State of Franklin Rd., Johnson city, TN 37604.

The family of Dr. William "Bill" Paul Dotson, Jr. created this Life Tributes page to make it easy to share your memories.

Send flowers to the Dotson, family.