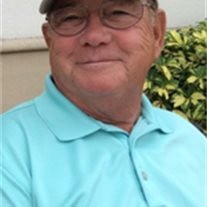 Walter "Bud" Kidner, age 75, of Pinellas Park, Florida, passed away Sunday, January 15, 2017 at his residence surrounded by his family after a courageous battle with lymphoma. A native of Detroit Michigan, he was a son of the late Walter Dennis Kidner, II, and Anna Trondle Kidner. Mr. Kidner retired from Budd Company/Bosch as a Manufacturing Engineer Manager and retired a second time from Electro Mechanical Corporation as a Corporate Manufacturing Controller. He was a member of the Model A Club and of St. Mary's Catholic Church, Johnson City. He was a volunteer with an ambulance service and received his Emergency Medical Technician from the University of Michigan. Mr. Kidner was on the Board of Directors of the Sunset Palms Community in Pinellas Park, Florida and served as Treasurer. In addition to his parents, Mr. Kidner is preceded in death by his wife, Carol Kidner in July 2012. Survivors include three daughters, Maureen Yoder and husband Paul, Kim Adler and husband Mike, Cathy Slagle and husband Jason, all of Johnson City; two sons, Walter "Wally" Kidner and Kenny Kidner and wife Karen, all of Johnson City; one sister, Jan Ross, Freemont, MI; grandchildren, Brooke, Hunter, Samantha, Brittnay, Allison, Jacob, Amanda, Nicholas, Finn, Will and Jolita; one great grandson, Javen; and special friend, Cookie Wiles, Pinellas Park, Florida. The graveside service and interment will be conducted at 11:00 A.M. Saturday, January 21, 2017 at Monte Vista Memorial Park with Father Jesus Guerrero officiating. Active pallbearers will be selected from family and friends. Those who wish to attend the graveside service are asked to meet at the funeral home at 10:20 A.M. Saturday to travel in procession to the cemetery. The family will receive friends Friday, January 20, 2017 from 6:00 until 8:00 P.M. at Appalachian Funeral Home, Johnson City. In lieu of flowers memorial contributions may be made to the Make a Wish Foundation, 8119 Isabella Ln, Brentwood, TN 37027. Order Flowers Service DetailsSaturday, January 21st, 2017 11:00am, Monte Vista Memorial Park Interment DetailsMonte Vista Memorial Park

Walter "Bud" Kidner, age 75, of Pinellas Park, Florida, passed away Sunday, January 15, 2017 at his residence surrounded by his family after a courageous battle with lymphoma. A native of Detroit Michigan, he was a son of the late Walter Dennis... View Obituary & Service Information

The family of Walter Dennis Kidner III created this Life Tributes page to make it easy to share your memories.

Send flowers to the Kidner family.