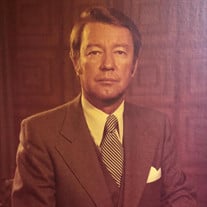 Vance W. Cheek, Sr., age 97, of Par Court, Johnson City, TN, went to his Heavenly Home on January 5, 2022. He was a native of Weaverville, NC, and had lived in Johnson City since 1947. He was a son of the late Liston G. and Marjorie Robinson Cheek. Vance Cheek was a veteran of the United States Air Force where he served in the Intelligence Unit decoding enemy communications. He was also a graduate of East Tennessee State College. Vance taught fifth and sixth grades at Limestone Elementary School and subsequently taught civics at North Junior High School. He then began working at Home Federal Bank where he ultimately became President of Home Federal and held that position until his retirement after 40+ years. During his tenure as President at Home Federal, Vance served on the Johnson City Commission as both Vice Mayor and Mayor. Vance had the pleasure of being appointed by Alan Greenspan to serve as a Governor on the Federal Reserve Board Advisory Council. He left a lasting city landmark with the creation of the “Gold Building” on the corner of North Roan St. and Mountcastle Drive. Vance was a member of Covenant Presbyterian Church where he assisted with many projects during his membership. Vance served as President of the United Way, President of the JC Kiwanis Club, President of the Board of Directors of the Johnson City Medical Center, and served on boards of the Red Cross, Salvation Army, Boy Scouts, JC Public Library Board, Economic Development Board, among many others. For Johnson City’s sesquicentennial ceremony he recently helped open the time capsule as the last remaining living member of the commission who buried it. Along with these many civic involvements, Vance also funded a playroom in Niswonger Children’s Hospital in memory of his wife, Joann. Vance was preceded in death by his beloved wife of 55+ years, Joann Clancey Cheek; daughter, Linda Ann Cheek; brothers, Robert Cheek, Donald Cheek, Finely Cheek; sister, Jean Davenport; beloved aunts, Stella and Louise Cheek. Survivors include daughter, Carol Ann Cheek Harmon (Charlie); son, Vance W. Cheek Jr., both of Johnson City, TN; three grandchildren, Justin Goulding (Thea), Courtney Ding (James), Catie Vance Cheek; two great grandchildren, Ethan and Alli Goulding; Chuck Mohler; Jody Whittimore Cheek; Phyllis Hughes; Julia Boulds, Jennifer Rockhill, Travis Rockhill; Janie Moss, Peggy Huddleston, and the Virginia Beach Cheeks and the North Carolina Cheeks. A service of remembrance will be held Monday, January 10, 2022, at 11:00 A.M. at Appalachian Funeral Home with Minister Dick Morris, officiating. The graveside committal service will be conducted in Monte Vista Memorial Park following the service. Pallbearers will be Justin Goulding, James Ding, Travis Rockhill, Nick Blevins, Josh Whittimore, and Jerry Eberhart. The family will receive friends at the family home at any time, 1607 Par Court, Johnson City, TN, 37601. A special thanks is given to Dr. Michael Grosserode and his staff; Dr. Lincoln T. Olsen and his staff; and Dr. Anindya K. Sen and his staff; and the angels from Amedisys Hospice. Memorials may be made to: Niswonger Children’s Hospital, 400 N. State of Franklin Road, Johnson City, TN, 37604.

Vance W. Cheek, Sr., age 97, of Par Court, Johnson City, TN, went to his Heavenly Home on January 5, 2022. He was a native of Weaverville, NC, and had lived in Johnson City since 1947. He was a son of the late Liston G. and Marjorie Robinson... View Obituary & Service Information

The family of Vance Winton Cheek Sr. created this Life Tributes page to make it easy to share your memories.

Send flowers to the Cheek family.