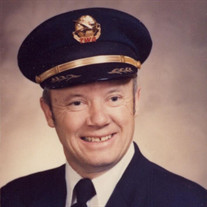 Thomas Frederick DaMitz Jr, 87, Boones Creek, died Monday, December 16, 2019, at NHC HealthCare of Johnson City. Tom was born in Wheatland, MO, and raised in Kansas City, MO. He was a son of the late Thomas F. and Ellen Robinett DaMitz, and the oldest of five children. In his teens, Tom left home for the Marine Corps, where he learned to be an aviation mechanic. He would later parlay those skills into a forty-two year career with Trans World Airlines. Tom was able to live his dream every time he sat down in the cockpit of a plane, eventually retiring as a Senior Captain for TWA on the Boeing 727, in 1991. Tom met his wife Margie in 1982 when he moved to Johnson City. They were blessed to live a wonderful life right here in East Tennessee. Tom’s retirement was filled with reaching out in faith to those less fortunate, whether as a deacon of his church or delivering meals to those in need. It was his faith in God, to which he held fast throughout his amazing life, that helped him pass on comfortably. He was a member of First Christian Church, where he served as a Deacon, and a former member of Tacoma Church of God. Tom enjoyed time he spent as a member of the ROMEO Club (Retired Old Men Eating Out), and had a lifelong love of airplanes of all types, both in career and hobbies. In addition to his parents, he was preceded in death by three brothers, Bob, Bud and Jack DaMitz. Tom is survived by his wife of more than thirty-two years, Margie Dearstone Little DaMitz; four children, Thomas F. DaMitz, III, Kingsland, GA, Lauriston DaMitz, Charlottesville, VA, Shaun Little, Nashville, Anthony Little and wife Windi, Elizabethton; seven beautiful grandchildren; three great-grandchildren; one sister, Wanda Allen and husband Terry; one brother, Ernie DaMitz and wife Charlotte, all of Missouri; several nieces and nephews. The funeral service will be conducted Thursday, December 19, 2019, at 6:00 P.M., from the East chapel of Appalachian Funeral Home, with Dr. Bill Konstantopoulos, officiating. Special music will be provided by Beth Hearn and her son, Josiah. The family will receive friends prior to the service Thursday from 4:30-6:00 P.M. in the East Parlor of the funeral home. The graveside committal service will be held Friday at 10:30 A.M., in Mount Pleasant United Methodist Church Cemetery, Greeneville. Pallbearers will be Andrew Little, David Hearn, Ron Bray, David Bays, Winfred Soloman and John Purgar. Those planning to attend are requested to meet at the funeral home by 9:30 A.M. Friday or at the cemetery by 10:30 A.M. Friday. Those who prefer to make contributions in lieu of flowers may do so to Ground Zero Ministries, P.O. Box 8279, Myrtle Beach, SC 29578. Memories and condolences may be shared at www.appfh.net. Appalachian Funeral Home & Cremation Services, 800 E. Watauga Ave., Johnson City, is serving the DaMitz family. (928-6111)

The family of Thomas Frederick DaMitz Jr. created this Life Tributes page to make it easy to share your memories.

Send flowers to the DaMitz family.