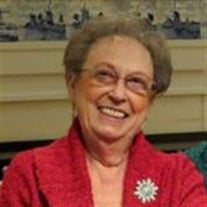 Theresa Peets Savard, 84, Jonesborough, passed away Friday, July 3, 2020, at NHC Healthcare of Johnson City. Theresa was born in Tupper Lake, NY to the late William and Maude LaCount Peets. She was of the Catholic faith, attending St. Mary’s in Johnson City and St. Matthews in Winter Haven, FL. In addition to her parents, Theresa is preceded in death by her loving husband, whom she adored and missed dearly since his passing 7 years ago, Richard Allen Savard, an infant son, Robert Savard, her brothers, Donald, Robert and Gerald Peets. Those left to cherish her memory are her children, Richard “Rick” William Savard and wife Miriam of Burnsville, NC, Kim Anders and husband Michael of Jonesborough, Sherry Perkins and husband Douglas of Austin, TX; grandchildren, Angela, Jess, Michael, Tanner; great-grandchildren, Sofia, Gigi, David, Lucie; siblings, Shirley Dechene, Nancy Maroun, Richard Peets and wife Carole all of Tupper Lake, NY. Theresa’s children would like to say a special thank you to Sam and the staff and NHC for taking such good care of their mother. It was Theresa’s wish to be cremated and laid to rest beside her loving husband at St. Matthew’s Church in Winter Haven, FL.

The family of Theresa A Savard created this Life Tributes page to make it easy to share your memories.

Send flowers to the Savard family.