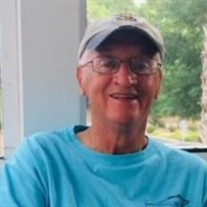 Stephen Dwight Miller Our precious Daddy peacefully went from this life and walked into the golden gates of Heaven on September 6th, 2021, at the age of 72. If you were lucky enough to have known him, you would have experienced his kindness, patience, “Dad joke” humor and know that he loved like Jesus. He was a man of faith. I have never met a man more patient and kind hearted than him. In his honor, please do something kind for someone today. You should know he loved his Country dearly, and proudly served in the United States Air Force. He loved watching his Tennessee Vols sports (sometimes shaking his head in disgust more often than not), ETSU sports, working in his garden (he had a green thumb for sure…best green beans in Tennessee), buying ALL the things from Lowe’s, fixing pretty much anything (literally), eating junk food (he would sneak Coca-Cola and Little Debbie cakes often), supporting Jordan and Tyler’s sports (he promised he’d never watch them play soccer when they switched from baseball, but they made him a fan after all), driving around in his Toyota Tacoma, piddling around in his garage, planting flowers and putting out seasonal yard scenes for our Momma. He was incredibly smart, especially in engineering design and machinist work. He graduated from Happy Valley High School in 1967 prior to joining the United States Air Force. He went on to graduate from Northeast State Community College. He had a successful career as a Mechanical Engineer, working at Texas Instruments, Siemens, Epic Technologies and eventually retiring as a Machinist from Borla Performance Industries. He loved each of his work places and coworkers, especially his friend Harold Licht. He was a faithful and loving husband to his wife of 47 years, Cheryl, whom he called his “Cherylee Jean”. He was her “Even Stephen”. He was the best Dad and role model in the world to us girls: Amy, Shanda and Holly. He helped lead us on a path to become who we are today. We are forever grateful that he shaped us into caring adults, was stern when needed, and loved us no matter what. Dad would have drove 10 million miles if any of us needed him, no questions asked. He was the son of the late Halder Miller, who he took after in so many ways, and Sarah Jane Miller, whom he took care of until his health declined. He was the brother of Danny, who he was lucky to work with for many years, and Charles, who died at a young age. He had so many extended family members and friends that he loved. He was also extra proud of his son-in-laws, Bill (his fishing buddy), Jonathan (his gardening buddy) and Cory (his chef buddy). His most treasured title was “Papaw”, “Pappa” and “Grandpa”. He was extra proud of each of his grandkids and great grandkids. I know he loved us three daughters, but oh did he think all of those grands hung the moon! He lived for them and to make them happy. You could always find him down in the floor playing, taking them outside or riding them around on his mower. We will always make sure his legacy lives on through them and they know what an amazing person he was. Grandchildren - Jordan (his J-Man), whom he thought of and raised like his own son, and wife Schylar, Tyler (his Ty Boy), whom he also thought of and raised like his own son, Taylor (his Tater Bug) and husband Ryan, and Addison (his Addy girl). Great grandchildren - Emerson (his Emmy girl), Luna (his Lunar Eclipse), and twins Jonah and Elias, who were his newest double pride and joys. I’ll leave you with two things Dad always said: “Sometimes you gotta laugh to keep yourself from crying” (Great advice!) and “Everybody’s gotta be somewhere, man!” And what a joy knowing that his somewhere is now in Heaven, man! Do you know for sure where your forever somewhere will be? A Graveside Service for Steve will be held on Friday September 10, 2021 at 2:00 P.M. in Roselawn Memory Gardens with Pastor Lenny Smith officiating. In lieu of flowers, the family asks that you donate to the charity of your choice in Steve’s memory.

Stephen Dwight Miller Our precious Daddy peacefully went from this life and walked into the golden gates of Heaven on September 6th, 2021, at the age of 72. If you were lucky enough to have known him, you would have experienced his kindness,... View Obituary & Service Information

The family of Stephen Dwight Miller created this Life Tributes page to make it easy to share your memories.

Our precious Daddy peacefully went from...

Send flowers to the Miller family.