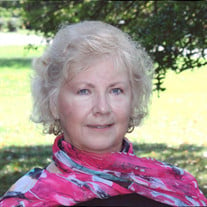 Sonja Fox McKamey, 79, of Johnson City, left for heaven on Saturday, May 30, 2020. She was the daughter of the late Kenneth and Hazel Walker and lived most of her life in her hometown of Piney Flats. She was an alumnus of Mary Hughes High School class of 1959 and ETSU. She was a former member of Gray UMC, member Greenwood Baptist with her late sister-in-law, Kate Teague, attended Edgefield UMC, and was a member of Piney Flats UMC. Sonja worked her entire adult life for women’s equality. She was a real estate broker and appraiser, member of NETAR, Tennessee Association of Realtors, the National Association of Realtors, instructor of real estate, received Wall of Fame and Realtor Emeritus from the Real Estate. She proudly served in the Monday Club where she served as President and served on several committees; she was also a member of the Johnson City Police Academy, volunteered at the Ballad Regional Hospital in Johnson City, Tenn., served as ambassador of the Chamber of Commerce, helped with the establishment of the Gray Library, she was active in the Sullivan County Imagination Library, and served as librarian of Gray Funeral Home and as a member of the Senior Citizen Foundation. She volunteered at the Mountain Home Veterans Administration and was a member of Salvation Army Auxiliary. She also served as President of the Tennessee Federation of Democratic women. Sonja organized and ran an art scholarship program at ETSU Training School in memory of her late daughter. She loved ETSU, UT Vols, Cincinnati Reds, reading, poetry, writing, swimming, dancing, the Rocky Mountains and her family and friends. Her favorite scripture that she lived by was Matthew 25: 31-46 from her Wesley Study Bible. In addition to her parents, Sonja was preceded in death by her daughter, Joy; sisters Betty Walker and Dorothy Pealer; brothers, Mickey, Jim and Beryl Walker; special sister-in-law; Kate Teague; and best friends Charlotte Roe, John Webb and a Doberman named Peach. Those left to cherish her memory her husband, William H. (Johnny) McKamey; sister, Peggy (David) Rusk; cousins, Wallace (Sue) and Duard Walker (Carolyn); several nieces and nephews. A private Graveside Service will be officiated by Rev. Estel Williams and Dr. Paul Humphrey officiating. A Memorial Service will be announced at a later date. In lieu of flowers Sonja’s family has asked that donations be made in her memory to Shell Cemetery 336 Kings Rd. Piney Flats, TN 37686 or any of her local charity organizations. This obituary was loving written by Sonja’s family.

Sonja Fox McKamey, 79, of Johnson City, left for heaven on Saturday, May 30, 2020. She was the daughter of the late Kenneth and Hazel Walker and lived most of her life in her hometown of Piney Flats. She was an alumnus of Mary Hughes High School... View Obituary & Service Information

The family of Sonja Walker Fox McKamey created this Life Tributes page to make it easy to share your memories.