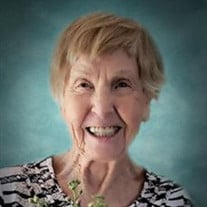 Shirley Jean Thompson Morrison, 86, of Johnson City, passed away Sunday, March 20, 2022, at Lakebridge Healthcare Center. Shirley was born in Johnson City to the late Charles Elmer and Ruby Blevins Thompson. Shirley was a lifelong resident of Johnson City and was a graduate of Jonesboro High School. She was a dedicated Christian and a member of The Guiding Light Bible Church. Shirley was also a wonderful seamstress, cook, and gardener. She was a loving mother, grandmother, great-grandmother, and aunt who will be missed incredibly by those who knew and loved her. In addition to her parents, Shirley was preceded in death by her husband, Ted Morrison; a son, Tony Lee Byrd; four brothers: Bill, Jack, Harry, & Don Thompson; a sister, Louise; and a few of her nephews. Those left to cherish Shirley’s memory include; her son, William “Mike” Byrd & wife Marcie; grandson, William Michael Byrd, Jr. & wife Mariah; two great-grandchildren, Rowan & Piper Byrd; two brothers, Jim & Luther Thompson; and several nieces and nephews. The memorial service for Shirley will be held Thursday, March 31, 2022 at 7:00 P.M. in the East Chapel of Appalachian Funeral Home with Pastor Mike Able, officiating and special music by Yahya Mhirsi and Fatma Souf. The family will receive friends prior to the service from 6:00-7:00 P.M. in the East Parlor of the funeral home. In-lieu-of flowers the family requests donations be made to your local animal shelter or Veteran’s organization.

The family of Shirley Jean Thompson Morrison created this Life Tributes page to make it easy to share your memories.

Send flowers to the Morrison family.