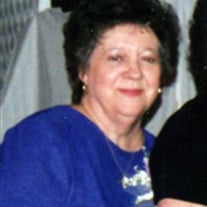 Shirley Mae Carver Lones, age 81, of Johnson City, went home to be with her Lord on Saturday, August 19, 2017 at her residence. A native of Jonesborough, TN, she was a daughter of the late Sherman Robert and Reba Goff Carver. Mrs. Lones worked... View Obituary & Service Information

The family of Shirley Mae (Carver) Lones created this Life Tributes page to make it easy to share your memories.