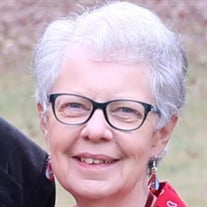 Sarah Long Farmer quietly entered heaven on June 30, 2020, surrounded by her family including her husband of 52 years, Daniel Cecil Farmer. She devoted her life to serving Jesus and serving others. Sarah was born February 17, 1945, in Johnson City, TN to Raymond M. Long, Sr. and Iris Moise Moore. After graduating from Science Hill High School, she went on to East Tennessee State University to earn her Bachelor's degree and began teaching English and mathematics. She and Dan were married November 11, 1967 at Central Baptist Church in Johnson City. After living in Crossville, TN and Augusta, GA for two years, they returned to settle in Johnson City and raise a family. Once her children were older, Sarah went back to work as a church secretary. She used her education background to train Southern Baptist church secretaries around the country for 30+ years, served as President of the Tennessee Baptist Convention Secretaries Association, and was an officer in the National Association of Ministry Assistants. She served in several area churches including Southwestern Baptist Church, North Johnson City Baptist Church, Unaka Avenue Baptist Church, Grace Fellowship, and the Baptist Student Union at ETSU. Upon retirement, she managed the TN Baptist Adult Homes Village in Johnson City for 5 years. A charter member of Southwestern Baptist Church, Sarah was very active in her church and lived out her faith not only through her local church, but also numerous church development and mission activities. At Southwestern Baptist Church she had served as the Sunday School Director, taught various Sunday School classes, and served on a multitude of committees including the Finance Committee, Long Term Planning Committee, and Pulpit Search Committee. In the Holston Baptist Association, she led the Discipleship Training committee several years and served in other volunteer roles. For 6 years, Sarah was elected to the Executive Committee of the TN Baptist Convention, one of only a few women who were selected. She and Dan led a brick-laying mission team every summer helping over 40 different churches nationwide. Every December, she helped coordinate a toy and gift drive for the children of Hellier, KY. Together, they served as short term missionaries in Burkina Faso, West Africa in 1982. Sarah is survived by her husband; her brother and sister-in-law, Raymond and Shonnie Long, Jr. of Johnson City; her two sons and their spouses, Daniel and MarthaKay Farmer of Orlando, FL, and Scott and Jeanie Farmer of Irmo, SC; her grandchildren Alex, Andrew, and Hannah-Catherine; and one niece and four nephews. In lieu of flowers, the family would prefer contributions made to the Sarah Farmer Memorial Mission Fund at Southwestern Baptist Church, 1112 Cherokee Road, Johnson City, TN 37604. A Memorial Celebration Service will be held at a later date at Southwestern Baptist Church. Burial will be at Happy Valley Cemetery in Elizabethton, TN.

Sarah Long Farmer quietly entered heaven on June 30, 2020, surrounded by her family including her husband of 52 years, Daniel Cecil Farmer. She devoted her life to serving Jesus and serving others. Sarah was born February 17, 1945, in Johnson... View Obituary & Service Information

The family of Sarah Long Farmer created this Life Tributes page to make it easy to share your memories.

Send flowers to the Farmer family.