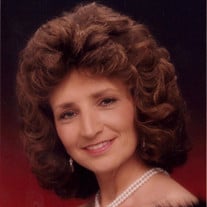 Sandy Garden Roberts, 67, Jefferson City, died unexpectedly Friday, June 19, 2020, at her residence. Sandy was a native of Johnson City, where she lived most of her life before moving to Jefferson City. She was a daughter of the late Joseph Garden, Jr. and Savannah Peters Garden. Sandy was a homemaker, but was formerly co-owner and operator of Cross Country Collections. She began her first job in the late 1960’s at the Shamrock, where she worked for nearly twenty years. Sandy was a former member of the “Y” Freewill Baptist Church. She loved watching her sons, and now her grandsons play sports, and enjoyed watching golf and traveling. In addition to her parents, Sandy was preceded in death by her first husband, Gary Roberts, and a brother, Jackie Garden. She is survived by her two sons, Gary Roberts, II and wife Kristie, Knoxville, Christopher Roberts, Jefferson City; her three grandsons, Evan, Garrison and Easton Roberts, Knoxville; two brothers, Kenith Garden, Telford, Jeffery Garden, Limestone; one sister, Angela Garden McQueen and husband Charles, Johnson City; her former husband and friend, Leonard Cross; several nieces, nephews, great-nieces and great-nephews. The funeral service will be conducted Thursday, June 25, 2020, at 7:00 P.M., from the East Chapel of Appalachian Funeral Home, with Rev. Dexter Hoilman, officiating. The family will receive friends Thursday prior to the service from 5:30-7:00 P.M. in the East Parlor of the funeral home. The graveside committal service will be held Friday, at 1:00 P.M., in Washington County Memory Gardens. Pallbearers will be Gary & Chris Roberts, Evan, Garrison & Easton Roberts, Charlie McQueen and Leonard Cross. Those planning to attend may either meet at the funeral home by 12:20 P.M. to proceed with the family to the cemetery, or at the cemetery by 12:50 P.M. Memories and condolences may be shared at www.appfh.net. Appalachian Funeral Home & Cremation Services, 800 E. Watauga Ave., Johnson City, TN 37601, is serving the Roberts family. (423)928-6111

Sandy Garden Roberts, 67, Jefferson City, died unexpectedly Friday, June 19, 2020, at her residence. Sandy was a native of Johnson City, where she lived most of her life before moving to Jefferson City. She was a daughter of the late Joseph... View Obituary & Service Information

The family of Sandy Garden Roberts created this Life Tributes page to make it easy to share your memories.

Send flowers to the Roberts family.