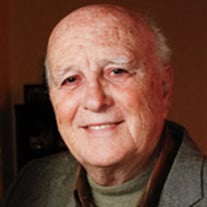 Robert D. LaPella, 87, Johnson City, died on Thursday, April 13, 2017 at the James H. Quillen VAMC, Mountain Home. A native of Indianola, Iowa, he was the son of the late George and Eathel LaPella. By his teenage years, he had already embraced his passion and love of music and singing. He began his lifelong pursuit of music education at Drake University, Des Moines, Iowa. After a stint of service in the USAF, he returned to Drake to finish his Bachelor's and Master's Degrees in Music. There, he met the love of his life, Jane McNeil. They were married in December 1954 and began their life of love, friendship and professional partnership. Robert held faculty positions at Bethany College, West Virginia, while undertaking graduate studies at Indiana University. Next, he taught at College of Emporia, Kansas; then in 1962, he came to East Tennessee State University where he retired after 35 years as Professor Emeritus. He held positions as Chairman of the Voice Department and Director of the Opera Workshop. He not only taught but truly mentored innumerable students in the art of singing. During this time, he served as a member and national officer of the National Association of Teachers of Singing; he and Jane founded the Johnson City Civic Chorale; and he became a member of the ETSU Foundation. Bob found pleasure and accomplishment in many other pursuits. He and Jane were world travelers and opera lovers. He was a creative builder of a harpsichord, playhouses, stage sets, scout projects, and - most treasured - the family log cabin. He loved the mountains and was an avid hiker and horseman. He enjoyed the ETSU Faculty Square Dance Club, and in retirement, was also a loyal volunteer mail carrier at JCMC for nine years. As a long-time member of Munsey Church, he sang in the Chancel Choir, participated in the Philosophers' Sunday School Class, and served on the Administrative Board. Although accomplished, he was humble and loving, influencing all who knew him. He leaves behind his loving wife of 62 years, Jane; his children and their spouses: Claire and David Reagan of Nashville, Chris and Larry Collins of Johnson City, Alex and Lisa LaPella of Unicoi; grandchildren: Emily Reagan Pritchard and husband Brandon, Whitney Reagan Kelley and husband Shawn, Joel Reagan, Ryan Collins and wife Brittany, Evan Collins, Sean Collins and wife Grace, Alden Collins, Freeman LaPella, and Calder LaPella; great-grandchildren: Riley and Kate Pritchard, and Hannah Kelley; brothers-in-law and sisters-in-law: Burns and Ida McNeil, Carolyn and the late Clarence Bartenhagen, Kay and Ron Gates; and numerous nieces and nephews. The family extends heartfelt thanks to the staff of Mountain Home VAMC, and especially his caring and competent personal physicians, Dr. Vini Krishnan and Dr. Agnes Hamati. A special thank you also to his faithful and loving Munsey Church family. A Celebration of Life Service for Robert LaPella will be held at 6:30pm on Monday, April 17 in the sanctuary of Munsey Memorial United Methodist Church, Johnson City. A reception and visitation will follow in Munsey's Christian Life Center. The Committal Service will be at 10am Tuesday, April 18 in the Munsey Courtyard Columbarium. Memorial contributions may be made to the Robert D. LaPella Voice Scholarship Fund at ETSU's Music Department, or to Munsey's Music Department or Missions Fund. Order Flowers Service DetailsMonday, April 17th, 2017 6:30am, Munsey Memorial United Methodist Church

Robert D. LaPella, 87, Johnson City, died on Thursday, April 13, 2017 at the James H. Quillen VAMC, Mountain Home. A native of Indianola, Iowa, he was the son of the late George and Eathel LaPella. By his teenage years, he had already embraced... View Obituary & Service Information

The family of Robert Dwight LaPella created this Life Tributes page to make it easy to share your memories.

Send flowers to the LaPella family.