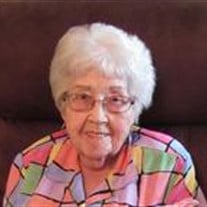 Rebecca (Becky) Rose Brumett Phillips, daughter of Harry Garland Brumett and Daisy Ellen McGinnis Brumett, was born in Sullivan Indiana, on May 6, 1929. On December 13, 2016, at her home in Unicoi, TN, she passed away following a lengthy illness. She was preceded in death by her husband, Dr. G. Richard Phillips, two older brothers, Thomas Dizney and Joe Wayne Brumett and a sister, Naomi Ruth Brumett Turpen. After she completed high school in 1947, she attended and graduated from what is now called Lincoln Christian University in Lincoln, Illinois. She met her future husband, Dr. G. Richard (Dick) Phillips while attending, and they were married on December 20, 1951. This would have been their 65th wedding anniversary. Their son, Dr. Richard W., was born late in 1952, and their daughter, Jane Ellen, followed in 1958. Becky began the role of "Preacher's wife" in Nebo, Illinois and then in Boswell, Indiana. She worked as a Veterinarian's Assistant while Dick continued his education at Butler University in Indianapolis. In late 1957, the family moved to East Ridge (Chattanooga), TN, for ministry to East Ridge Christian Church. She served as church secretary there, and played piano/led the singing. During this time, she received her Master's Degree in Education from the University of Chattanooga (now UTC), and began her teaching career at East Ridge High School. While there, she wrote the school's alma mater, which is still used today. In 1962, Dick was called to the faculty of Lincoln Christian Seminary. Becky began teaching at Springfield High School, and later at Central Elementary School in Lincoln. In 1967, the family moved to Johnson City, so that Dick could serve on the faculty of Milligan College. Becky taught school at Rock Creek Elementary in Erwin, and at South Side School in Johnson City until her retirement. Becky was a strong advocate for her profession, being President of the Johnson City Education Association, and being named "Teacher of the Year" for Johnson City in 1985. Besides her teaching career, Becky enjoyed her hobbies of macramé, painting, traveling, playing the piano/organ (teaching her children and grandchildren), hand bells and many other crafts. Becky was a warm and loving mother, grandmother and great grandmother. She was an active participant of Grandview Christian Church, where she would have been a member for 50 years in 2017. She played the piano and organ there for many years, and led the Calling Group to visit and encourage homebound members of the congregation. Becky is survived by son Richard W. (Lucy) of Unicoi, TN, daughter Jane Ellen, Staten Island, NY, four grandchildren, and six great-grandchildren. Children of son Richard W. include Melissa Phillips Reading (Jon); Richard J. (Ashley), and Sarah E. Phillips. Etolia Brooke Fisher is the daughter of daughter Jane Ellen. Great grandchildren are Caroline Phillips, Savanna Torres, Logan Reading, Brynn Reading, Meadow Phillips and Willow Phillips. Services will be held at Grandview Christian Church on Friday, December 16, 2016 at 6:00PM, with a two-hour visitation immediately prior (4-6). Graveside service and burial will be at the Atlanta Cemetery in Atlanta, IL on Monday, December 19th at 1:30 PM. In lieu of flowers, memorial gifts may be made to The G. Richard and Rebecca R. Phillips Faculty Development Funds at either Milligan College (P.O. Box 750, Milligan College, TN 37682) or Emmanuel Christian Seminary at Milligan College (One Walker Drive, Johnson City, TN 37601). Memories and condolences may be shared with the family at www.appfh.net. Appalachian Funeral Home and Cremation Services. 800 E. Watauga Ave., Johnson City, TN, is serving the Phillips family. Order Flowers Service DetailsFriday, December 16th, 2016 6:00pm, Grandview Christian Church

Rebecca (Becky) Rose Brumett Phillips, daughter of Harry Garland Brumett and Daisy Ellen McGinnis Brumett, was born in Sullivan Indiana, on May 6, 1929. On December 13, 2016, at her home in Unicoi, TN, she passed away following a lengthy illness.... View Obituary & Service Information

The family of Rebecca Rose (Brumett) Phillips created this Life Tributes page to make it easy to share your memories.