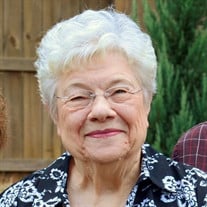 Phyllis Simerly Kitzmiller, 93, Jeffersonville, IN, formerly of Johnson City, passed away Sunday, April 24, 2022, at Hillcrest Village. Phyllis was born in Johnson City to the late John and Ethel Woodby Simerly. Phyllis was a 1946 graduate of Science Hill High School. She was a member of the Church of Christ. Phyllis was the wife of a minister. She and her husband lived in many locations and worked in many churches. She was guided by her faith in God and her love for Jesus Christ throughout her life. She had a great sense of humor and was very much a people person. Later in life she developed an avid interest in researching her family's genealogy. In addition to her parents Phyllis was preceded in death by her husband, Carl Kitzmiller, daughter, Susan Valdetero of Monroe, NC, siblings, Gordon Simerly, Donald Simerly, Ruth Smith and Ernest Simerly all of East Tennessee. Survivors include a son, Paul Kitzmiller and wife Virginia of Jeffersonville, IN; grandchildren, Derek Kitzmiller and wife Tricia of Sellersburg, IN, Adam Kitzmiller and wife Rachel of McRae, AR, Ashley Herron and husband Jonathan of Wake Forest, NC, Dane Valdetero and wife Meagan of Charlotte, NC; son-in-law, Danny Valdetero of Wadesboro, NC; nine great-grandchildren and several nieces and nephews. The funeral service for Phyllis will be held Monday, May 2, 2022 at 11:00 A.M. in the East Chapel of Appalachian Funeral Home with Todd Houston, officiating. The graveside committal will follow in Monte Vista Memorial Park. Pallbearers will be chosen from family. The family will receive friends 10:00-11:00 A.M. in the East Parlor of the funeral home.

The family of Phyllis Simerly Kitzmiller created this Life Tributes page to make it easy to share your memories.

Send flowers to the Kitzmiller family.