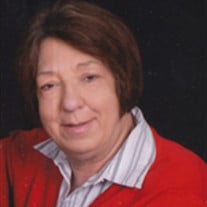 Phyllis Dawn Cooper, age 70, of Johnson City, was welcomed to her heavenly home on Monday, January 22, 2018 following a brief illness. She was a faithful member of By Faith Freewill Baptist Church. She held many positions in the church, most... View Obituary & Service Information

The family of Phyllis Dawn Cooper created this Life Tributes page to make it easy to share your memories.

Phyllis Dawn Cooper, age 70, of Johnson City, was welcomed to...

Send flowers to the Cooper family.