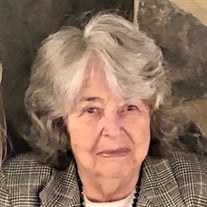 Peggy Bolling Baldwin, 85, Johnson City, entered eternal rest Monday, January 10, 2022, at Lakebridge Healthcare and Rehabilitation, following a brief illness. Peggy was a native of Damascus, VA. As a military wife, she traveled alongside her husband and children to many locations, Italy being her favorite. She was a daughter of the late Lawrence “L.C.” and Christine Richardson Bolling. Peggy was a 1954 graduate of Damascus High School and later received an Associate Degree from Alverson–Draughon College, Huntsville, AL. She, along with her late husband, was the owner of Baldwin Properties, where she served in various capacities. Peggy attended Grace Fellowship Church, and was formerly active with the Johnson City Senior Center. In addition to her parents, she was preceded in death by her husband, Master Sergeant Terrill Quinton Baldwin, U.S. Army Retired, in 2006, her son, Jeff Baldwin, in 2021, one brother, Timmy Bolling, three sisters, Lois Hash, Linda Worley and Sylvia Helbert. Peggy is survived by her daughter, Joy Baldwin Humphreys and husband Randy, Johnson City; one brother, Chuck Bolling and wife Beverly, Damascus; one sister, Donna Bolling, Damascus; several nieces and nephews. The funeral service for Peggy will be conducted Friday, January 14, 2022, at 1:00 P.M., from the East Chapel of Appalachian Funeral Home, with Pastor Mike Watts, officiating. The family will receive friends Friday prior to the service from 11:30 – 1:00 P.M. in the East Parlor of the funeral home. The graveside committal service will follow Friday at 2:00 P.M. in the Mountain Home National Cemetery Annex. Pallbearers will be selected from family and friends. In-lieu-of flowers, the family requests memorial donations be made in Peggy’s name to either ALSAC/St. Jude Children’s Research Hospital, 501 St. Jude Place, Memphis, TN 38105, or The Humane Society of Washington County, 2101 W. Walnut St., Johnson City, TN 37604.

The family of Peggy Bolling Baldwin created this Life Tributes page to make it easy to share your memories.

Send flowers to the Baldwin family.