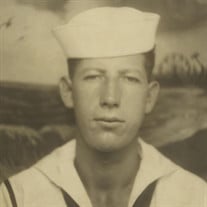 Johnson City - The Defense POW/MIA Accounting Agency (DPAA) announced on May 11, 2021, that Navy Fireman 1st Class Paul E. Saylor, 21, of Johnson City, Tennessee, killed during World War II, was accounted for on Nov. 24, 2020, and will be coming home to be buried next to his parents, the late Reverend Samuel B. Saylor, and Mary L. Saylor of Johnson City. He had three brothers, the late Arthur M. Saylor, the late Lenard J. Saylor, and the late George W. Saylor. On Dec. 7, 1941, Saylor was assigned to the battleship USS Oklahoma, which was moored at Ford Island, Pearl Harbor, when the ship was attacked by Japanese aircraft. The USS Oklahoma sustained multiple torpedo hits, which caused it to quickly capsize. The attack on the ship resulted in the deaths of 429 crewmen, including Saylor. Paul enlisted in the United States Navy in Nashville, Tennessee on July 3rd, 1940. From there Paul headed to the United States Navy Training School at the Naval Ordinance Base in Norfolk, Virginia for basic training. After boot camp, he was dispatched to San Pedro Naval Base near Los Angeles, California to join his ship the USS Oklahoma (BB-37) a Nevada-class Battleship Paul’s many letters home have been preserved over the last 80 years by family members. They reveal much about his character and work ethic. He loved his family and was proud of his accomplishments and promotions with the Navy. He diligently sent money home as the country was still in the grip of the Great Depression and his contribution made a difference in the lives of those he left behind. Survivors include nephews, A. Keith Saylor (Millie) of Sacramento, CA, Joe T. Saylor (Leslie) of Fruita, CO, Phillip L. Saylor and Jerry W. Saylor both of Melbourne, FL, Daryel E. Saylor of Port Orange, FL, and a niece, Susan Saylor of Foley, AL, as well as numerous other extended family members. The graveside funeral service will be conducted at Noon on Friday, August 20, 2021, in Happy Valley Memorial Park, 2708 Elizabethton Hwy, Johnson City, TN 37601. Full military honors will be accorded by the United States Navy Funeral Honors Team. Family members will meet at the funeral home to travel in procession with Paul. Others planning to attend are requested to meet at the cemetery by 11:45 A.M. Those who would like to sign the register book may do so at the funeral home anytime Monday, August 16 through Thursday, August 19, from 8:00 A.M. until 4:30 P.M., or Friday at the cemetery.

The family of Paul Edd Saylor created this Life Tributes page to make it easy to share your memories.

Send flowers to the Saylor family.