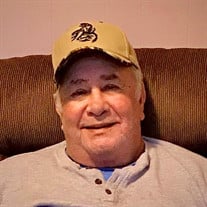 Paul W. Murray, 80, Johnson City, passed away Sunday, March 22, 2020, at Sycamore Shoals Hospital, following complications from Alzheimer’s Disease. Paul was a native of Butler, and had previously lived in Four Oaks, NC, Belvidere, IL, and Jacksonville, FL, as he traveled with his work. He lived most of his life in Johnson City and was a son of the late Billy Ray “Big Bill” Murray and Goldie Lee Proffitt Roberts. Paul was a retired textile worker. He was a Baptist. Paul enjoyed building bird houses for his family and friends. He was such a sweet man, always smiling and happy to see you, even as his health declined. In addition to his parents, Paul was preceded in death by a brother, Bill Murray, and his best friend Gracie. He is survived by his wife of fifty-seven years, RosaLee Murray; two children, Jeffrey Murray and wife Heather, Elizabethton, Paula Lam and husband Jay, Johnson City; one brother, Jimmy Murray and wife Mary, Johnson City; sister, Janice Lyons; two granddaughters, Amanda Belt and husband Dustin, Chuckey, Savannah Murray, Elizabethton; several nieces and nephews, including Jackie Johnson and husband David. Due to the recent mandated restrictions, the services for Paul will be privately held at Appalachian Funeral Home with interment to follow in Happy Valley Memorial Park. The family requests those who prefer to make memorial donations do so to the Alzheimer’s Association of Northeast Tennessee, 2020 Meadowview Parkway, STE 100, Kingsport, TN 37660.

The family of Paul W. Murray created this Life Tributes page to make it easy to share your memories.

Send flowers to the Murray family.