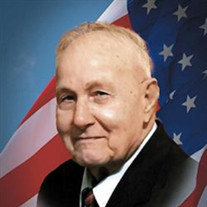 Oscar Ray Banks, 91, of Johnson City, went home to be with the Lord on Tuesday, June 16, 2020 at his home surrounded by his family. Oscar was born to the late Chester and Sarah (Gouge) Banks. He proudly served his country in the United States Army during the Korean War. During his time in the service, he was awarded the Korean Service Medal, United Nations Service Medal, the Bronze Star Accommodation, and the Combat Infantryman Badge (CIB). Oscar retired from the Army Reserves as a Second Lieutenant. He spent over 25 years as a teacher and administrator in the Carter County School System. He also taught in the Hamblen County and Washington County School Systems. Oscar was a past President of 278 Regimental Combat Team Association. He attended King Springs Baptist Church with his lovely wife and was a member of the Christian church. Oscar and his wife Beverly loved to travel. They visited 49 of the 50 States with their RV adventures; they traveled cross-country three times. He always jokingly said he would have visited Hawaii but there is not a bridge long enough for them to travel on. They also enjoyed square dancing across the US and Canada. Oscar could fix anything and he was an amazing cook, he was famous for cooking large meals whether for his family, his church family or a visiting teen ministry group. His baked beans and pancakes were superb. Oscar never missed a graduation of his children or grandchildren and felt so blessed to have met his four great grandchildren. He was all about achieving successfully and that is mirrored in his children and grandchildren. He exemplified a truly wise American. He would say, "If you want to take something out of the barrel of life, you have to give something into it." He gave generously throughout his life. Oscar Banks was a man who had the reputation of working without stopping and outworking most. How wonderful to know that he now is resting in Heaven, reunited with so many from his home, his family, the Korean War and many friends that have gone on before him. In addition to his parents Oscar was preceded in death by his sister, Nellie Banks Carroll; brothers, Brian and Glen Banks; niece, Karen Gouge; step-son, Jere Wagner. He is survived by his loving wife of over 29 years, Beverly (Lawson) Banks; brothers and sisters, Bruce Banks, Kathy Banks Gouge and husband Charlie, Roger Banks; sons, Mark Banks and wife Pam, Daniel Banks and wife Cheryl; step-daughter, Cindy Barker and husband Mark; step-daughter-in-law, Allyson Wagner; grandchildren, Hannah Banks Johnson and husband David, Caleb Banks, Tobias Banks D.O., Elizabeth Banks Ferraro and husband Justin; three step-grandchildren, Olivia, Marshall and Sarah; four great-grandchildren, Ethan Ferraro, Emma Ferraro, Abigail Ferraro, and Jonah Johnson; along with several beloved nieces, nephews, and other family members. The Banks family will gather to greet friends and share memories on Thursday, June 18, 2020 at Appalachian Funeral Home from 5:00pm-7:00pm. A Funeral Service will follow at 7:00pm with Minister Daniel Banks, Reverend Jerry Cornett, Reverend Ken Lamon, and Reverend Gary Addington officiating. A Committal Service and Internment will take place on Friday, June 19, 2020 at Mountain Home National Cemetery beginning at 11:00am. Caleb Banks, Tobias Banks D.O., David Johnson, Justin Ferraro, Ethan Ferraro, and Chad McClelland will serve as pallbearers. Honorary pallbearers will be Bruce Banks, Roger Banks, Charlie Gouge, and the men of King Springs Baptist Church. The Banks family would like to extend a special thank you to Roger Banks, Kathy Gouge, Tena McClelland, Madison McClelland, Chad McClelland, Freda Banks, and Linda Osborne for all their help with heartfelt thanks to niece, Jennifer Banks, who was a “Godsend”. The family would also like to thank the staff of Amedisys Hospice for their care and help with the journey. In lieu of flowers, the Tennessee Banks family has requested that donations be made in Oscar’s memory to St. Jude Children’s Research Hospital, 501 St. Jude Place Memphis, TN 38105. The South Carolina Banks family has requested donations be made to Myrtle Beach Christian Church (MBCC) for Amanda’s Place, a place of protection for women and children. MBCC, 1226 Burcale Road, Myrtle Beach, SC 29579

Oscar Ray Banks, 91, of Johnson City, went home to be with the Lord on Tuesday, June 16, 2020 at his home surrounded by his family. Oscar was born to the late Chester and Sarah (Gouge) Banks. He proudly served his country in the United States... View Obituary & Service Information

The family of Oscar Ray Banks created this Life Tributes page to make it easy to share your memories.

Send flowers to the Banks family.