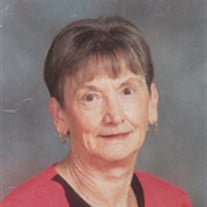 Mildred "Gertie" Adams, age 79, returned to her heavenly home, unexpectedly on Thursday, March 16, 2017 at her residence. A native of Mitchell County, North Carolina, she was a daughter of the late Earl and Pauline Sparks Ward. Mrs. Adams was a member of By Faith Freewill Baptist Church, and retired from the Dawn of Hope as an Instructional Assistant. Mrs. Adams was very active in her church and sang in the choir. She loved and admired her grandkids, and would light up when they were around. She considered them her pride and joy. In addition to her parents, Mrs. Adams is preceded in death by her husband, Herbert Adams, in February 1997; two sisters, Hazel Owens and Elizabeth Rash. Survivors include her son, Mike Adams and wife Tiffany, Unicoi; daughter, Daphne Elliott and husband Jeffery, Jacksonville, Florida; grandchildren, Dylan and Gavin Adams; niece, Phyllis Dawn Cooper, Johnson City; nephew, Eddie Owens, Johnson City; very special friends, Margarett Mahaffey, Eddie and Pat Miller. Several nieces and nephews also survive. The funeral service for Mrs. Adams will be conducted at 4:00 P.M. Sunday, March 19, 2017 in the East Chapel of Appalachian Funeral Home with Pastor Terry Jones and Mr. Jason Blankenship officiating. The family will receive friends Sunday from 2:00 until 4:00 P.M. in the East Parlor of the funeral home. The graveside service and interment will be conducted at 10:45 A.M. Monday, March 20 from the Mountain Home National Cemetery. Those who wish to attend the graveside service are asked to meet at the cemetery at 10:35 A.M. Active pallbearers will be selected from family and friends. Order Flowers Service DetailsSunday, March 19th, 2017 4:00pm, Appalachian Funeral Home- East Chapel Interment DetailsMountain Home National Cemetery

Mildred "Gertie" Adams, age 79, returned to her heavenly home, unexpectedly on Thursday, March 16, 2017 at her residence. A native of Mitchell County, North Carolina, she was a daughter of the late Earl and Pauline Sparks Ward. Mrs. Adams was... View Obituary & Service Information

The family of Mildred Gertrude Adams created this Life Tributes page to make it easy to share your memories.

Send flowers to the Adams family.