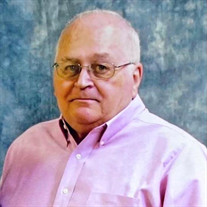 Mickey Davis Campbell, 81, went home to be with the Lord on Monday morning, April 25, 2022, at Princeton Transitional Care. Mickey was born December 15,1940, in Johnson City, but moved with his family to San Francisco, CA, at the age of 5, where he spent his childhood and early adult years. Mickey was the only child born to Robert Davis Campbell and Thelma Sue Bowman Campbell. He met the love of his life when he visited family in Johnson City in 1961. He married Lorena Beatrice Slagle on February 14, 1962, after which they returned to San Francisco where he served in the U.S. Air Force, Military Police Canine Division, from 1959-63. Following his discharge from the service, Mickey continued serving his country in the Air Force Reserves from 1963-65. Upon his return to Johnson City, Mickey was employed by Appalachian Funeral Home, where he worked with his uncle, Charles T. Bowman, for the next fifteen years. He then worked at ETSU with the Physical Plant, where he retired with over 20 years of service. “GO BUCS!” Mickey was a devoted member of Southwestern Baptist Church from 1989 to present, where he served as a Deacon, leader of the Royal Ambassadors, oversaw the Jennie Stone Food Pantry, and was a longtime member of the Anna F. Lacey Sunday School Class. In addition to his parents, he is preceded in death by his paternal grandparents, James Robert and Estelle Campbell, and his maternal grandparents Ernest and Gladys Massengill Bowman, along with many aunts, uncles, and cousins. Those left to cherish his memory are his wife of sixty years, Lorena Slagle Campbell; sons Herbert Davis (Kimberly) Campbell, James E. (Elaine) Campbell; daughters Teresa Sue (Steven) Smith, and Patty Mercele (Jeffery) Campbell; ten grandchildren Joshua, Rachel, Katelyn, Ian, Zaccarie, Codie, McHalie, Christian, Jordan, and Bradley; seven great-grandchildren; several nieces, nephews and cousins. A service celebrating Mickey’s life will be held on Thursday, April 28, 2022, at 7:00 pm, in the Sanctuary of Southwestern Baptist Church, with Pastor Greg Salyer, officiating. The family will receive visitors prior to the service Thursday from 5:00 pm - 7:00 pm. at the church. It was Mickey's wish to be cremated, so a private family committal service will be held at a later date in the family plot of Monte Vista Memorial Park. In lieu of flowers, the family requests that donations be made to Southwestern Baptist Church, 1112 Cherokee Road, Johnson City, TN 37604. Donations can be designated to the Deacons Benevolence Fund or the Children and Youth Ministries.

Mickey Davis Campbell, 81, went home to be with the Lord on Monday morning, April 25, 2022, at Princeton Transitional Care. Mickey was born December 15,1940, in Johnson City, but moved with his family to San Francisco, CA, at the age of 5,... View Obituary & Service Information

The family of Mickey Campbell created this Life Tributes page to make it easy to share your memories.

Mickey Davis Campbell, 81, went home to be with the Lord on Monday...

Send flowers to the Campbell family.