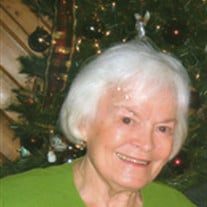 Mary Farlow Hensley, 96, Johnson City, died peacefully on Friday, May 5, 2017. Mary was a native of Fairmont, WV, was raised in Greensboro, NC, and had been a resident of Johnson City for most of her life. She was the daughter of the late Julius Branson and Cora Clayton Farlow. Mary was a 1941 graduate of The Women's College of the University of North Carolina, where she received a Bachelor Degree in Education. She was a school teacher until 1948, when she married her late husband, William McKinley "Mac" Hensley, who preceded her in death in 2012. Mary was a longtime, active member of Munsey Memorial United Methodist Church. She was also very active in the community, where she was a former member of the Monday Club, Garden Club, Bridge Club, the Johnson City Civitan, Civinette Clubs and D.A.R. In addition to her parents and husband, Mary was preceded in death by two sons, Thomas Ronald "Ronnie" Hensley, Dr. Richard William Hensley, DDS and one brother, Joseph Newton Farlow. She is survived by her three grandsons, whom she was so proud, Richard McKinley "Mac" Hensley, CDT, Memphis, Dr. William Matthew Hensley and wife Rachel, Whitesburg, and Thomas Ronald Maxwell Hensley, Johnson City; two great-grandchildren, Hadley Brooke Hensley and William Clay Hensley; one brother, David Leroy Farlow, Trinity, NC. The funeral service will be conducted Monday, May 8, 2017, at 2:00 P.M., from the East Chapel of Appalachian Funeral Home, with Rev. Michael Lester, officiating. Special music will be provided by The Reverend Douglas Grove-DeJarnett, soloist, and Jane LaPella, organist. Committal service and entombment will follow in the mausoleum chapel of Monte Vista Memorial Park. The family will receive friends Monday prior to the service from 12:00-2:00 P.M. in the East Chapel of the funeral home. In-lieu-of flowers, the family request donations be made to Munsey Memorial United Methodist Church, 201 S. Roan St., Johnson City, TN 37601. Order Flowers Service DetailsMonday, May 8th, 2017 2:00pm, Appalachian Funeral Home- East Chapel Interment DetailsMonte Vista Memorial Park

Mary Farlow Hensley, 96, Johnson City, died peacefully on Friday, May 5, 2017. Mary was a native of Fairmont, WV, was raised in Greensboro, NC, and had been a resident of Johnson City for most of her life. She was the daughter of the late Julius... View Obituary & Service Information

The family of Mary Farlow Hensley created this Life Tributes page to make it easy to share your memories.

Send flowers to the Hensley family.