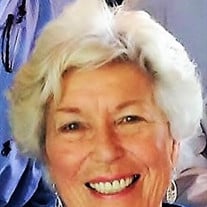 Martha Nan Garland Meredith passed away peacefully on August 29, 2019, at the age of 82. Martha Nan was born on October 6, 1936 in Johnson City to Isaac Wright and Mary Edna Hickman Garland. Martha Nan was preceded in death by her husband of 49 years, Joseph Hyder “Bill” Meredith, her beloved her son, Matthew Isaac Meredith and her brother, John Hickman Wallin. Martha Nan is survived by three children Mitch (Nancy) of Johnson City, Mindy Coulter (Tom) of Knoxville, and Mary Jo Barreto (Rich) of Tega Cay, South Carolina. “Nana” was very proud of her 10 grandchildren and their spouses, Taylor (Melissa) Meredith of Roanoke, Elizabeth (Jon) Rhea of Seattle, Patrick Meredith of Birmingham, John (Ashley) Coulter of Knoxville, Meredith (Igor)  Oruc of Jacksonville, William Coulter and Davis Coulter of Knoxville, Anna Katherine (Denny) Townsend of Florence, SC, Richard Barreto of Tega Cay, and Matthew Watkins Meredith of Johnson City, loving them unconditionally. Nana also delighted in her 7 great-grandchildren and relished every new picture of them. She enjoyed a large network of extended family of nieces and nephews and friends. Martha Nan was a dedicated mother and a master of gardening. Martha Nan graduated from Science Hill High School in 1953, attended Stephens College the following year. She returned to college in 1967 and earned a Bachelor of Science cum laude in history from ETSU in 1970. She met the love her life, Bill, at Meredith’s Boat Dock on Boone Lake and they were married on September 10, 1955. Martha Nan lived most of her life in the Garland family home on Knob Creek Road, a life that revolved around family, faith, friends and community. As her children grew older, Martha Nan began to take an active interest in the business community by beginning her business career in banking. She later joined Bill in their property management and development business. She was also the managing partner of The Colonial Corporation which was responsible for the development of the Colonial Center, Bennigan’s, Steak & Ale and the first Lowe’s in Johnson City. Martha Nan was an active member of First Christian Church and the Mr. & Mrs. class. She was a pioneer as one of the early women leaders of Johnson City. Martha Nan had a passion for health care, community service and youth programs. She served on the board of the Johnson City Memorial Hospital and as board president in 1992-93. She was an active member of the Washington County Commission from 1982-2002 serving as chairwoman of the budget committee for many years. She also served as chairwoman of the Med Tech Park Board, Blue Ridge Medical Management, vice-chair of the Johnson City Public Building Authority, the first president of the Friends of the Johnson City Public Library, chairman of the Oakland Park Children’s Home, and president of the Junior League of Johnson City and the Tennessee Assembly of Hospital Trustees. She was a founding member and the 2007-2010 Regent of the Ann Robertson Chapter of the Daughters of the American Revolution and a member of the National Society of Colonial Dames XVII Century. She also served on the board of directors of the Salvation Army, League of Women Voters, Washington County Republican Women, and the Johnson City/Washington County Economic Development Board. She was an emissary for the Quillen College of Medicine and a member of ETSU President’s Distinguished Trust.  Martha Nan was recognized by the Mountain States Health Alliance Foundation as its 1999 Spirit of Johnson City recipient. The Johnson City/Washington County Chamber of Commerce inducted Martha Nan into its Hall of Fame in 2014, a year in which “Faith in the Future” was the theme. Martha Nan epitomized that theme. Martha Nan was an active supporter of the Johnson City Sail and Power Squadron and the Boone Lake Association. She and Bill enjoyed boating adventures and spending time at “Dad’s Pad” on Boone Lake with their family and friends. Martha Nan enjoyed the camaraderie of her bridge club and Brown Gardenias friends. The family will receive friends on Wednesday, September 4th at 9:30am with a celebration of life service to begin at 11:30 at First Christian Church, 200 E. Mountcastle Dr., Johnson City, TN 37601. Dr. Eugene Wigginton, Minister, will officiate.  Honorary pallbearers will be members of the Bridge Club of America (BCA) and the Mr & Mrs Sunday School Class at FCC. The family will also be receiving friends at a reception following the service at the Johnson City Country Club, 1901 E. Unaka Ave., Johnson City, TN 37601. The graveside committal service will be held on Thursday, September 5th at 8:00 am at Happy Valley Memorial Park, officiated by Dr. Dick Morris. Friends are invited to attend and are requested to meet at the cemetery by 7:50 am. Active pallbearers will be her grandchildren. In-lieu-of flowers, memorial donations may be made to the Johnson City Public Library, 100 W. Millard St., Johnson City, TN, 37604, The Salvation Army, 2508 S. Roan St., Johnson City, TN 37601, First Christian Church, or the charity of your choice. Memories and condolences may be shared at www.appfh.net. Appalachian Funeral Home & Cremation Services, Johnson City, is serving the Meredith family. (928-6111)    Please click here to view the video tribute

Martha Nan Garland Meredith passed away peacefully on August 29, 2019, at the age of 82. Martha Nan was born on October 6, 1936 in Johnson City to Isaac Wright and Mary Edna Hickman Garland. Martha Nan was preceded in death by her husband... View Obituary & Service Information

The family of Martha Nan (Garland) Meredith created this Life Tributes page to make it easy to share your memories.