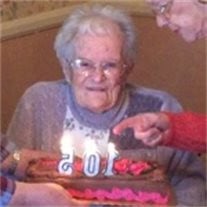 Marjorie Walton Roach, age 105, of Johnson City, went home to be with the Lord on Wednesday, June 14, 2017 at her residence following a brief illness. A native of Central City, Kentucky, she was the daughter of the late Dr. John Porter Walton and Jennie Owsley Walton. Mrs. Roach was a long standing member of Central Baptist Church, which she loved. She was proud to say that she was a daughter of one of the last horse and buggy doctors. Mrs. Roach attended Bethel College, Randolph Macon Women's College, then received her B.A. degree from Georgetown University. She was the wife of Raymond Roach, who was a World War II Navy veteran. Together, they owned and operated Southern Auto Supply Co. in Johnson City for many years. Following the death of her husband, Mrs. Roach became active in several clubs including the Johnson City and Jonesborough Garden Club, the Johnson City Monday Club and the Johnson City and Jonesborough Bridge Club. Mrs. Roach was a loving and charitable lady. In addition to her parents, Mrs. Roach was preceded in death by her husband, Raymond Roach. Survivors include her cousins, Helen Walton Birdwell, Carthage, TN and Gilliam Walton, Lakeland, Florida; special caretakers and friends, Sue Fields, Cherie Deal and Brian Fields, all of Kingsport. Numerous cousins, nephews and nieces also survive. The funeral service for Mrs. Roach will be conducted at 12:00 P.M. Saturday, June 17, 2017 in the East Chapel of Appalachian Funeral Home with Dr. Tommy Hood officiating. The family will receive friends Saturday from 11:00 until 12:00 P.M. in the East Parlor of the funeral home. The graveside service and interment will follow at Monte Vista Memorial Park. Active pallbearers will be selected from family and friends. Honorary pallbearers will be Al Roach, John D. Royster, and Dr. Chris Hemphill. In lieu of flowers memorial contributions may be made in memory of Marjorie Roach to the Raymond Roach Scholarship Fund, 1 Blowers Blvd, Milligan College, TN 37682. The family would like to extend a special thank you to all the caretakers that have cared for Mrs. Roach over the years. Order Flowers Service DetailsSaturday, June 17th, 2017 12:00pm, Appalachian Funeral Home- East Chapel Interment DetailsMonte Vista Memorial Park

Marjorie Walton Roach, age 105, of Johnson City, went home to be with the Lord on Wednesday, June 14, 2017 at her residence following a brief illness. A native of Central City, Kentucky, she was the daughter of the late Dr. John Porter Walton... View Obituary & Service Information

The family of Marjorie Walton Roach created this Life Tributes page to make it easy to share your memories.

Send flowers to the Roach family.