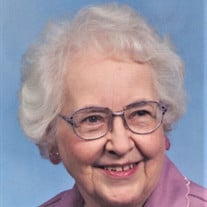 Margaret Louise Seaver McMackin, 99, of Johnson City, died Tuesday, September 3, 2019, at Williamsburg Villa Assisted Living. Louise was a Johnson City native. She was a daughter of the late C.W. and Ada Darden Seaver. Louise was an elementary school teacher, teaching first grade and kindergarten at Keystone Elementary and Columbus Powell Elementary for twenty-five years. She was a longtime member of First United Methodist Church, where after her retirement, she taught Sunday school class for more than 20 years. In addition to her parents, Louise was preceded in death by her husband, Harry William McMackin, Jr., in 2001, a son, Donald Ray McMackin, and her sister, Lillian Rhea Seaver Walker. She is survived by two sons, Harry W. McMackin, III, Richard A. McMackin; six grandchildren; thirteen great-grandchildren. She will be greatly missed and was loved by her family, friends, and former students who will always remember and love her. The graveside funeral service will be held Saturday, September 7, 2019, at 1:00 P.M., in Oak Hill Cemetery, Johnson City.

The family of Margaret Louise (Seaver) McMackin created this Life Tributes page to make it easy to share your memories.