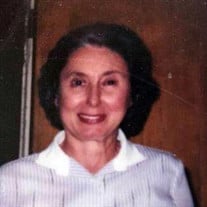 Lucille Stephens Darden departed this earth on December 9, 2019 at the age of 93. She was born on May 24, 1926 in Greeneville, Tennessee, the second daughter of Gus and Zoitsi Stephens. Lucille’s parents lived the American Dream, having immigrated to the U.S.A. from Albania and becoming proud citizens, and she lived it too. Lucille graduated from Greeneville High School in 1943 and was named “Wittiest Girl” in her graduating class. Because of the war effort, there were no yearbooks her senior year, but an autograph book reveals that a highlight was a play called “His Honor The Sap” in which she portrayed “Katy”, a rather dimwitted person. Her portrayal embarrassed her parents, who knew that she was actually quite brilliant and it didn’t make sense to them for her to act otherwise. After high school, Lucille attended business school for one year before matriculating to Tusculum College where she graduated in 1948 with an English degree, a History minor, and plans to become a teacher. She was always interested in current events and a lifelong lover of books and poetry. Lucille never entered the teaching profession , however, instead accepting employment with the Social Security Administration at its Johnson City office where she enjoyed a 37 and ½ year career. As fate would have it, the office was located on the same block as a restaurant called the Rainbow Corner, which was owned and operated by a Veteran of the second World War, native Johnson Citian Bill Darden. They married on Christmas Day in 1952. Lucille was preceded in death by her parents and older sister, Christina Stephens Buda. She was also preceded in death by her loving husband of 58 years, William R. Darden, Sr. Their love for and devotion to one another was always apparent. Lucille is survived by her sons, William R. Darden, Jr. and Stephen Matson Darden, and their wives Caroline McQuary Darden and Anne Spurrell Darden, respectively. Grandchildren are Jennifer Delaney Darden Cross (Jordan), William Reed Darden, III, Katharine Lucille Darden and Gus Matson Darden; one great grandson, Jordan Cooper Cross; nephews William C. Buda (Kay), Robert Ross (Anne), Thomas Malcolm Darden, Jr. (Carla); nieces Janice Lynn Buda and Cynthia Darden; and several great nephews and great nieces. The family extends a special thank you to everyone who participated in Lucille’s care and comfort, including those at Colonial Hill Retirement Center, Johnson City Internal Medicine, Appalachian Orthopaedic Associates, Gastrointestinal Associates of Northeast TN, Banyas and Miranda, DDS and Johnson City Medical Center, as well as those who cared for dad and looked after mom too at the V.A., and the ministers, staff and members of our beloved church for more than 4 generations of Dardens: Munsey Memorial United Methodist Church. You started as caregivers and quickly became friends . . . like family. One of you called Lucille your “most loving encourager” and another said she was like a second mother. Those are loving tributes to a very loving person. Lucille’s strong faith sustained her and enriched her life as well as the lives of others. A graveside committal service will be held on Sunday, December 22 at 12:45 p.m. at Monte Vista Cemetery. Those wishing to join the processional to the cemetery should be at the funeral home no later than 12:30. Selected family members and long time family friend Morgan Littleford will serve as pallbearers. Following the graveside service, the family will receive friends in the sanctuary of Munsey Memorial United Methodist Church beginning at 1:30 p.m., with a Memorial Service to follow at 3:00 p.m. In-lieu-of flowers, memorials may be made to Munsey Memorial United Methodist Church, 201 S. Roan St., Johnson City, TN 37601, Tusculum University, 60 Shiloh Rd., Tusculum, TN 37745, or the charity of the giver’s choice.

Lucille Stephens Darden departed this earth on December 9, 2019 at the age of 93. She was born on May 24, 1926 in Greeneville, Tennessee, the second daughter of Gus and Zoitsi Stephens. Lucille&#8217;s parents lived the American Dream, having... View Obituary & Service Information

The family of Lucille Stephens Darden created this Life Tributes page to make it easy to share your memories.

Send flowers to the Darden family.