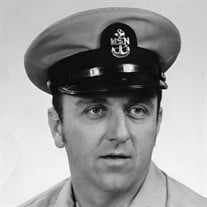 Leon (Leo) George Laurendeau, age 81, of Johnson City, passed away Monday, April 26, 2021. Leo was born in Providence, Rhode Island in 1939 to Leon A. Laurendeau and his wife, Elizabeth, and was the oldest of their nine children. Leo spent his early years in Vermont until he joined the U.S. Navy in 1956. He trained as a Machinist’s Mate and served on the USS Vulcan before becoming qualified to serve on submarines. He served on several submarines during his military career, including the USS Amberjack, USS Daniel Webster, and the USS Sam Rayburn. He also served as a Naval Recruiter, and as an instructor in Submarine School. He retired from the service in 1975. Early in his military career, Leo met Emily Stafford while in Virginia, and after a short courtship, the two married on Valentine’s Day, February 14, 1959. They went on to raise four girls while spending 62 years together. After retiring from the Navy, Leo went on to earn a Bachelor of Theology degree from Clear Creek Baptist School, and spent the next few years as a pastor until settling in Johnson City. Besides the military, music was always a big part of his life. He played the guitar and loved to play and sing with his family. Leo was preceded in death by his parents, and by brothers Edward and Joseph, and sister Jeannie. He is survived by his wife, Emily; daughters, Deborah Cabello, Yvonne (Matt) Carter, Suzette (Connie) Bigelow, and Barbara (Jeff) Homan; 10 grandchildren, 10 great-grandchildren, and several nieces and nephews. A graveside service will be held Friday, April 30, 2021 at 11:00 A.M. at Mountain Home National Cemetery (Annex). Those planning to attend are to meet at the cemetery by 10:50 A.M., and are encouraged to wear a mask or protective face covering and practice appropriate social distancing.

Leon (Leo) George Laurendeau, age 81, of Johnson City, passed away Monday, April 26, 2021. Leo was born in Providence, Rhode Island in 1939 to Leon A. Laurendeau and his wife, Elizabeth, and was the oldest of their nine children. Leo spent... View Obituary & Service Information

The family of Leon (Leo) George Laurendeau created this Life Tributes page to make it easy to share your memories.

Send flowers to the Laurendeau family.