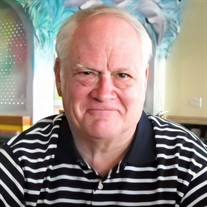 Kenneth Edwin Tafer (Ken, Kenny) passed away suddenly on Friday, October 1, 2021. He was 78. Ken is survived by his loving wife of 53 years, Frances Tafer (née Johnston) of Piney Flats, TN; his daughters, Keri Siegel (Matthew) of Chatham, NJ, Kelly Rector (Cullen) of Ashburn, VA, Kimberly Callis (Patrick) of Bethesda, MD, and Kacie Tafer (Jon) of Silver Spring, MD; his grandchildren, Andrew Edwin & Ethan Siegel, Lincoln & Clara Callis, and Ava Rector; sister Susan Lambert (Marc) of Forestville, MD; brothers-in-law, sister-in-law, nieces & nephews, as well as extended family and friends. Ken was preceded in death by his mother Florence Tafer (née Johnson) and father John Tafer, as well as more than 700,000 Americans who passed due to COVID-19. Ken was born on September 28, 1943 in Washington D.C. He grew up in District Heights, MD and attended Suitland High School before enlisting in the U.S. Coast Guard in 1962. He then spent over 20 years as a police officer with the Washington D.C. Metropolitan Police Department. Once retired from the Police Department, he spent 13 years working security for the U.S. Library of Congress. After retiring from the Library of Congress, he worked 10 years at Civista Medical Center in LaPlata, MD and Johnson City Medical Center in Johnson City, TN befriending all nurses, doctors, and first responders who crossed his path. Ken, Kenny, Dad, Pop will be dearly missed. Throughout the years he and Fran loved to travel all over the world, enjoyed listening to music, going out dancing, watching movies, and most of all being with family. He was a loving father who adored his daughters, and a wonderful “Pop” who could often be found sitting on the floor playing with and entertaining his grandchildren. His smile, his charismatic personality, his ability to make everyone around him light up and laugh, and his endearing ability to touch everyone’s heart, will forever be remembered. A time of gathering to remember will be held at a later date. In lieu of flowers, the family requests donations be made to a charity of your choice in Kenny’s honor.

The family of Kenneth Edwin Tafer created this Life Tributes page to make it easy to share your memories.

Send flowers to the Tafer family.