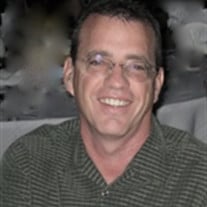 Keith Ponder, of Johnson City, TN, passed away on Sunday, December 17th, 2017, at the age of 61. After a relentless battle with colon cancer, he left us that day with his familiar smile. Keith was born to parents Elizabeth and Terrell Ponder on December 31st, 1955. He grew up as one of seven children, graduated from Science Hill High School, and received his BA from East Tennessee State University. Keith was a proud father and considered family the most important part of his life. He is lovingly held in memory by his wife Lora and their daughter Brianna; his sons Jason (Cristin) and Aaron Ross, and their mother Frances; his brothers and sisters: Jan, Mark (Sheryl), Brian (Shelyne), Cheryl Herr (David), Chris (Cheryl), and Terry; and many dear nieces and nephews, great-nieces and nephews, aunts, uncles, a great aunt, cousins, in-laws, and friends. Keith's favorite memories involved spending time with family, especially outdoors. Give him a fire, roasting stick, some biscuits, and he would be a happy camper. Keith enjoyed socializing with everyone, playing cards, and traveling. In his younger years, he was a talented athlete and enjoyed playing many sports where he formed numerous lifelong friendships. He spent countless hours at the JC Park and Recreation, where he developed a love for tennis. He would perfect those skills on the wood siding of his childhood home, ultimately earning his place at the varsity and collegiate levels for SHHS and ETSU tennis teams. Although plagued with numerous health issues, Keith considered himself lucky. You would never know his health complications when talking to Keith as he was young at heart and quick to laugh, especially at himself. His unmatchable wit and sense of humor served him well, even in his waning weeks, as Keith was still telling jokes and making others laugh. Anyone who has a fond, or funny, memory of Keith is invited to share it as we gather for a casual celebration of his life from 5:00pm to 7:00pm followed by a time for sharing of memories from 7:00 to 7:30pm at Appalachian Funeral Home (800 East Watauga Avenue, Johnson City, TN 37601) on Friday, December 22nd, 2017. In lieu of flowers, please make memorial contributions to the Colorectal Cancer Alliance at: 1025 Vermont Avenue NW, Suite 1066, Washington, D.C. 20005 (http://www.ccalliance.org). Memories and condolences may be shared with the family at www.appfh.net. Appalachian Funeral Home and Cremation Services, 800 E. Watauga Ave., Johnson City, is serving the Ponder family. (423) 928-6111 Order Flowers Service DetailsFriday, December 22nd, 2017 5:00pm, Appalachian Funeral Home- East Chapel

Keith Ponder, of Johnson City, TN, passed away on Sunday, December 17th, 2017, at the age of 61. After a relentless battle with colon cancer, he left us that day with his familiar smile. Keith was born to parents Elizabeth and Terrell Ponder... View Obituary & Service Information

The family of Keith Ponder created this Life Tributes page to make it easy to share your memories.

Send flowers to the Ponder family.