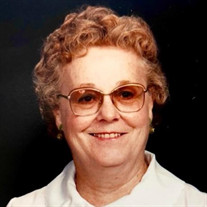 Katherine June Lilly, 95, a devoted wife, loving mother, and pianist/organist, was called home to the Lord on January 4, 2022. She peacefully passed at home, to now join her beloved husband Dennis of 48 years, who went on ahead of her in 2001. Katy was born March 25, 1926, in Fairmont, WV, as a daughter of George and Iva Ginkel Donham. Her great grandfather was George Adams, former street commissioner of Fairmont, after which the main thoroughfare downtown, Adams Street, was named. She graduated high school from Saint Peters Catholic School, then on to West Virginia University in Morgantown to complete her Bachelor of Arts and Master’s degrees in Music, with a concentration in piano and organ. As a student at WVU, Katy met Dennis, who was also in the Music Master’s program in voice, and she served as his accompanist. They were married in November 1952 at Munsey Memorial United Methodist Church. After having lived in Johnson City, they moved to Amherst, MA, and College Park, MO, finally relocating back to Johnson City in 1967. Katy taught private piano lessons from home and served as an organist for a number of local area churches, which include First United Methodist Church in Johnson City, and United Methodist Church in Elizabethton. She served as organist and later as music director at Erwin Presbyterian Church, retiring after having served 33 years. In addition to her parents Katy was preceded in death by two daughters, Marjorie Harvey and Susanne Lilly James, brother, John Donham, and daughter in law, Kelly MacFarlane Lilly. Survivors include her three sons, David and wife Sandra (Rast) Lilly of Johnson City, Mike Lilly of Cartersville, GA, Jason and wife Jani (Ahmad) Lilly of McDonough, GA; grandchildren, Ryan and his wife, Katherine Derise and husband Matthew of Memphis; Zach Lilly of Pinehurst, NC, Madison Scott and husband Alex of Sanford, NC, Nick Lilly of Atlanta, GA, Devin Lilly of Dallas, TX, Garrett Lilly of Statesboro, GA, Eric Harvey of Jonesborough; great grandchildren, twins George and Zoey Derise; son-in-law, Rigby Harvey of Gray; sister, Eleanor Timms and husband Delmar, of Wheeling, WV; several nieces and nephews. The family will receive friends on Friday, January 14, 2022, from 6:00-8:00 P.M. at Appalachian Funeral Home. The private family graveside committal will be conducted Saturday, January 15, 2022 at 10:30 A.M. in Washington County Memory Gardens with Pastor Stan Webster, officiating. Katy will be laid to rest beside her husband Dennis. Pallbearers will be chosen from family. In-lieu-of flowers, donations can be made to the music fund at Erwin Presbyterian Church, 105 N. Elm Ave. Erwin, TN 37650.

Katherine June Lilly, 95, a devoted wife, loving mother, and pianist/organist, was called home to the Lord on January 4, 2022. She peacefully passed at home, to now join her beloved husband Dennis of 48 years, who went on ahead of her in 2001.... View Obituary & Service Information

The family of Katherine June Lilly created this Life Tributes page to make it easy to share your memories.

Send flowers to the Lilly family.