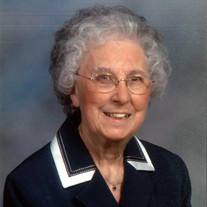 Luvanne H. Hubbs, 95, Johnson City, passed away peacefully surrounded by her loving family, on Thursday, January 23, 2020, at the Johnson City Medical Center. Mrs. Hubbs was a native of Knoxville and had been a resident of Johnson City since 1956. She was a daughter of the late William Sigle and Linnie Francis Harris. Mrs. Hubbs was a homemaker and was formerly employed with the Knoxville City School System. She was a member of First Presbyterian Church, where she formerly served as President of the Women of the Church, a former Girl Scout leader, enjoyed golfing and traveling with her husband, liked cooking for everyone, and loved spending time with her grandchildren. In addition to her parents, Mrs. Hubbs was preceded in death by her husband of nearly fifty-eight years, A.R. “Dick” Hubbs, in 2004, and her brother, Robert B. Harris. She is survived by two daughters, Ann Hubbs Wells, Knoxville, Janet Hubbs Ruffin and husband Lee, Johnson City; her sister, Francis Harris Wood, Knoxville; five grandchildren, Dusty Sines and husband Tom, Jordan Kimbrough and David Wells, all of Knoxville, Drew Ruffin, Elkton, OR, and Kara Ruffin, Johnson City; three great-grandchildren, Gabriel, Chloe and Daven, all of Knoxville; several nieces and nephews. The family would like to thank all of the staff and caregivers of Brookdale Senior Living for the excellent care given to Mrs. Hubbs. The memorial service to celebrate Luvanne’s life will be conducted Saturday, February 1, 2020, at 1:00 P.M., from the East Chapel of Appalachian Funeral Home, with Mr. Gerald Malcolm, officiating. Inurnment will follow in Washington County Memory Gardens. The family will receive friends Saturday prior to the service from 12:00-1:00 P.M. in the East Parlor of the funeral home. Those who prefer to make memorial contributions may do so to The River Ministry, c/o Stacy Larsen, 125 W. Main St., Johnson City, TN 37604, or The American Cancer Society, 508 Princeton Rd. #102, Johnson City, TN 37601.

Luvanne H. Hubbs, 95, Johnson City, passed away peacefully surrounded by her loving family, on Thursday, January 23, 2020, at the Johnson City Medical Center. Mrs. Hubbs was a native of Knoxville and had been a resident of Johnson City since... View Obituary & Service Information

The family of Luvanne H. Hubbs created this Life Tributes page to make it easy to share your memories.

Send flowers to the Hubbs family.