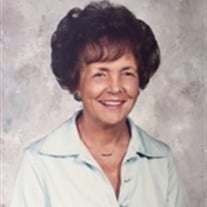 Julia Baumgardner Cross, 92, Nashville, TN passed away August 23rd at McKendree Village. Born August 1923 in Bristol, TN, she was the seventh child of John Dixon and Bessie Kegley Baumgardner. Julia was educated in the Bristol public school system, graduated from Virginia Intermont College and received her B.S. from the University of Tennessee at Knoxville in 1946. She was first employed as the secretary to the president of Virginia Intermont College from 1946 to 1949. In 1949 she married Dr. Ralph E. Cross and they had three children, William, Charles, and Julianne. In 1966 Julia made Nashville her home with her two sons, where she began work at the Methodist Publishing House as a secretary and editorial assistant. In 1969 she then went to work for the U.S. District Court of Middle Tennessee in the clerk's office. By 1974 Julia had risen to the rank of courtroom deputy and then chief deputy in the clerk's office. In 1978 she became the first woman to be appointed the Clerk of the U.S. District Court of Middle Tennessee, faithfully serving until 1984. She pioneered women's involvement in many civic organizations within Nashville. Julia was the first woman to be asked to join the Nashville City Club. After retiring from the Federal Government, she worked at Vanderbilt Hospital patient services. Upon returning to the the tri-cities area, she volunteered her time to the Crumley House. Julia was devoted to her family and friends. She lived her life with grace and courageI� she loved her gardens and had an encyclopedic knowledge of flowers, especially Iris'. An accomplished bridge player, she loved to entertain her many friends with graciousness and a quick wit. She had a ready smile until the end. Julia is survived by her son Charles and two grandchildren, Bonnie and Martin. The funeral service for Julia will be at 11:00 AM Saturday September 3, 2016 in the chapel of St. John's Episcopal Church, 500 N Roan St., Johnson City, TN 37601. The family will receive friends from 10:00 AM until the funeral service. Interment will follow in Monte Vista Memorial Park. In lieu of flowers please make donations to The Crumley House, 300 Urbana Rd., Limestone, TN 37681. Order Flowers Service DetailsSaturday, September 3rd, 2016 11:00am, St. John's Episcopal Church Interment DetailsMonte Vista Memorial Park

The family of Julia (Baumgardner) Cross created this Life Tributes page to make it easy to share your memories.

Send flowers to the Cross family.