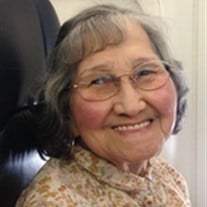 Juana Flores Bailey, widow of Henry Augustus Bailey Sr. and beloved mother, grandmother and great grandmother, went home to her Blessed Savior on Monday afternoon, following a long battle with congestive heart failure. She was 88 and passed away peacefully with family by her side at Broadmore Senior Living in Johnson City. Visitation will be from 5 p.m. to 7 p.m. Thursday at Central Church of Christ on Oakland Avenue in Johnson City with services following. Pastor Tim Hall will officiate. Burial will be at Fairview Cemetery at 10 a.m. Saturday in Newbern, Tenn. Appalachian Funeral Home has charge of arrangements. Juana Bailey enjoyed a long and eventful life. She was born on Valentine's Day in 1929 in Agana, Guam, a U.S. possession in the north-central Pacific, the daughter of Jesus Lujan Flores and Maria Martinez Flores. As a youth, Juana Bailey and her family endured a brutal occupation by Japanese invaders during World War II. Nevertheless, she and her fellow islanders were loyal American patriots, and never lost their faith in God and in their eventual liberation by U.S. forces. Her late husband, a career Navy man, was a veteran of the U.S. Pacific Fleet under Adm. Chester Nimitz that reconquered the island in 1944, and she always referred to Mr. Bailey as "my hero." They were married on October 9, 1948 in Barrigada, Guam and had a blessed union of 53 years. Mr. Bailey, a retired Chief Commissaryman, passed away on July 14, 2001. As a supportive Navy wife, Juana Bailey traveled the world and across the length and breadth of the United States as she provided a happy home for her husband and children. She enjoyed gardening, cooking, leisure traveling, and visiting with family and friends. A resident of Johnson City since 2003, Juana Bailey was an active member of Central Church of Christ and the Women's Bible Study Group, rarely missing a Sunday session. She also relished her excursions with the Red Hat Society. Juana Bailey was also proceeded in death by her parents; two infant sons, George and Ben; and one daughter, Juanita Ann Bailey Jaggers. She leaves two sons, Henry A. Bailey Jr. (Janie) of Senatobia, Miss.; and Robert Bailey (Anne) of Johnson City; and a daughter, Sybilla Bowler (Michael) of Williamsburg, Va. Also, grandchildren Yvonne "Eve" Bowler, Brian Lee Street, Heather Kathryn Rivera (Joseph), Jeremy Hamilton Bailey (Holly), Alexia Meredith Bailey, Blaine Bailey Bowman (James), and Beth Bailey Lane (Jon). Great-grandchildren include Aaron, Daniel, Gabriel, Donavin, and Valerie. Juana Bailey leaves a host of other relatives including two brothers, Manuel Flores of California, Frank Flores of Florida; and a niece, Terry Saunders of Florida. The family wishes to thank Broadmore Senior Living and physician Dr. Mary Jane Gibson for their care given Juana Bailey during her illness. In addition, Blaine Bailey Bowman was an especially supportive caregiver throughout the life of her grandmother. Memorials may be sent to Central Church of Christ at 2722 Oakland Avenue, Johnson City, TN, 37601. Memories and condolences may be shared with family at www.appfh.net. Appalachian Funeral Home and Cremation Services, 800 E. Watauga Ave., is serving the Bailey family.(423)928-6111 Order Flowers Service DetailsThursday, October 19th, 2017 7:00pm, Appalachian Funeral Home- East Chapel

The family of Juana Martinez Flores Bailey created this Life Tributes page to make it easy to share your memories.