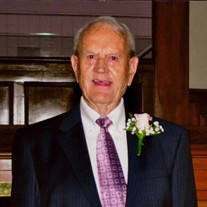 John Haynes Ryan, 90, of Johnson City, went home to be with the Lord on Wednesday, November 25, 2020 at his home surrounded by his family. He was born to the late John C. and Mary Sue (Haynes) Ryan in Elizabethton on December 25, 1929. John spent most of his life in Washington County, his family moved to Johnson City in 1933. He was a graduate of the 1947 class at Science Hill and a graduate of the 1950 class at ETSU. John then joined the United States Air Force 1951 and proudly served his Country until 1953 when he was Honorably Discharged as a 1st Lieutenant. He was a Presbyterian Sunday School Teacher and an Ordained Preacher. John Served 15 Churches in the Tri-Cities area. He owned John Ryan Automobiles and was in the car business for over 70 years. John was known as Johnson City’s best used car dealer for several years. In addition to his parents John was preceded in death by his by his grandson, Ryan Bennett. Survivors include his wife, Janice Ryan; daughter, Mary Elizabeth Brown and husband Rick; grandchildren, Shelby Hartlege and husband Jake, Sarah Brown, and Jonathon Brown; stepsons, Kevin Baker and wife Barbara, Kelly Baker and wife Brandie; step-grandchildren, Blythe Brown, Emily Edwards, Brandon Baker and wife Brianna, Brady Baker and wife Cassie; 7 great grandchildren; special friend, Bryon Milhorn who was his manager for 15 years; nephews Haynes Blank and wife Karen, Lee Blank and wife Diane. The Ryan family will gather to greet friends and share memories on Saturday November 28, 2020 in the East Chapel of Appalachian Funeral Home from 5:00pm-7:00pm. A Funeral Service will follow at 7:00pm with Paul “Pat” Mooney, Minister and Dr. W. Edward Fine, Associate Minister officiating. Committal Service and Interment will be held on Sunday November 29, 2020 at Happy Valley Memorial Park beginning at 2:00pm. Bryon Milhorn, Al Hicks, Brent Robinson, Bobby Rines, Carl Lady, and William Bolling will serve as pallbearers. Honorary pallbearers will be Kevin Baker, Kelly Baker, Jonathon Brown, Jake Hartledge, Brandon Baker, and Brady Baker. Everyone who wishes to attend is asked to wear a face mask and practice social distancing. Special thanks to Al Hicks and Hospice for their services. Lieu of flowers contributions can be made to Downtown Christian Church 335 E. Main St. Johnson City, TN 37601 or Ballad Hospice House.

John Haynes Ryan, 90, of Johnson City, went home to be with the Lord on Wednesday, November 25, 2020 at his home surrounded by his family. He was born to the late John C. and Mary Sue (Haynes) Ryan in Elizabethton on December 25, 1929. John... View Obituary & Service Information

The family of John Haynes Ryan created this Life Tributes page to make it easy to share your memories.

Send flowers to the Ryan family.