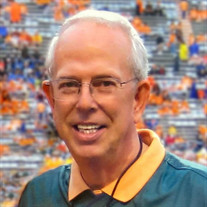 John Neill Rippetoe, 74, Johnson City, died Thursday, April 14, 2022, at his home surrounded by his loving family, following a courageous, fourteen-year battle, with Parkinson’s Disease. John was a native and lifelong resident of Johnson City. He was a son of the late Dr. Charles D. and Beatrice Beasley Rippetoe. John was a 1966 graduate of Science Hill High School, where he excelled in athletics, playing football, baseball, basketball and track & field. He received many accolades, including being named All-Big 7 Conference in football and track & field, and All-State in football. John had such an outstanding senior year as quarterback for the Hilltoppers in football, he was named All-American. John continued his education with a scholarship to the University of Tennessee, Knoxville, where he was a member of the Vols football team for four years, including the 1967 Litkenhous National Championship team, 1967 and 1969 S.E.C. Champion teams, and teams that played in the Gator Bowl (1966), Orange Bowl (1967), Cotton Bowl Classic (1969) and Gator Bowl (1969). For two of his four years at U.T., his roommate was Vol legend Lester McClain, who quickly became one of John’s dearest friends and remained so the rest of his life. He received a B.S. Degree in Education with a major in Natural Science in 1970. Always a desire to learn, John returned to college receiving an MBA with a focus on Organizational Management from Tusculum College in 1994. Following his graduation from U.T. in 1970, John joined the U.S. Army and served his country in the Vietnam War. Following his discharge from active duty, he continued serving for more than twenty years in the Tennessee Army National Guard with the 2nd Squadron 278 Armored Cavalry Regiment. John worked as a teacher and coach at Greeneville High School, Greeneville, and John Sevier Middle School, Kingsport. He then worked with McKesson Chemical/ Univar/ Van Waters & Rogers, Kingsport, until he went into business as a Founding Partner, President and Marketing Director of Appalachian Environmental Resources, Johnson City, working as an Environmental Consultant in waste management, until the advancement of Parkinson’s forced his retirement from daily work in 2012, although his partners never allowed him to truly retire, as he remained an integral part of his work family. John was a devout Christian, and along with his family, was a founding member of Cornerstone Church He was inducted into the Science Hill High School Athletics Hall of Fame in 2007 and was an original founding member of the Kermit Tipton Scholarship Foundation, where he continued to serve as an officer. Always remaining busy, John had many hobbies throughout his adult life. He held a private pilot’s license and love to fly, enjoyed woodworking and photography, golf, sailing, gardening, and had an interest in bee keeping. John excelled in everything he put his mind to, yet always remained humble throughout his life. He always looked forward to traveling with his family, whether to the family’s “mountain home” on Mt. Mitchell, NC, the family hotel, The Historic Gatlinburg Inn, or the yearly family beach trip to Pawley’s Island, SC or St. Augustine, FL. He was never without his itinerary, fully prepared, down to each detail, for each and every trip. John was a true “VOL FOR LIFE”, and never missed watching a game, preferably at his beloved Neyland Stadium. In addition to his parents, he was preceded in death by his brother, Hugh, and a sister, Brenda. John is survived by his wife of fifty-one years and love of his life, Doris Hale Rippetoe; four children, Lisa Rippetoe Mathes and husband David, John Paul Rippetoe and wife Sarah, Leigh Ann Rippetoe and Laura Rippetoe Ainsworth; sister, Nancy Rippetoe Crumley and husband Lynn; thirteen grandchildren, Austin and wife Abby, Mason and fiancé Makayla, Garrison Brown, Lily Rice and Ian Mathes, John and David Rippetoe, Madison Rippetoe Brigman and husband Blake, Christopher and Jacob Casey, Emma, Aidy and Ander Ainsworth; great-grandson, Braxton Brigman, and expectant great-grandchild due in May; sister-in-law, Susan Hale Burns and husband Larry; nieces, nephews, cousins and very special caregivers, Kim Schoen and Kalie Porter. In addition to Kim and Kalie, the family would like to extend a very special thank you to the staff of Amedisys Hospice, especially Seth, for their excellent care of John these past four weeks. The funeral service celebrating John’s life will be conducted Friday, April 22, 2022, at 7:00 P.M., from the East Chapel of Appalachian Funeral Home. The family will receive friends Friday prior to the service from 4:30-7:00 P.M. in the East Parlor of the funeral home. The graveside committal service will be held Saturday at 2:00 P.M., in Monte Vista Memorial Park. Military honors will be accorded by the Veterans Military Honor Guard, sponsored by the D.A.V. Chapter #39, Bluff City. Pallbearers will be grandsons and grandson-in-law. Those planning to attend are requested to meet at the cemetery by 1:50 P.M. Saturday, and if convenient, wear John’s favorite color, U.T. Orange of course. It is the family’s request that memorial contributions in-lieu-of flowers be made in John’s name to either the Science Hill High School Gridiron Club, 18 Hunters Ridge Road, Johnson City, TN 37604, or the Kermit Tipton Scholarship Fund, 203 E. Holston Ave., Johnson City, TN, 37601.

The family of John Neill Rippetoe created this Life Tributes page to make it easy to share your memories.

Send flowers to the Rippetoe family.