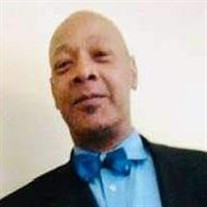 John R. Collins II, 59, Johnson City, son of John Collins, Sr, and the late Emogene Irene Thompson, departed this life on Saturday, November 2, 2019, at the Johnson City Medical Center, following a lengthy illness. Along with his mother, two brothers, Frankie Louis Johnson and Eddie Carroll Johnson, as well as his maternal and paternal grandparents, preceed him in death. John was born on July 2, 1960 in Johnson City, where he was a lifelong resident. He graduated from Science Hill High School and was a member of First United Methodist Church, where he served in various capacities as a choir member, clothing closet coordinator, and food pantry volunteer. John was a breast cancer survivor and participated in fundraisers and walks for breast cancer. He enjoyed helping others and was always willing to extend a helping hand to those in need. His interests included theatre, culinary arts, music, and gardening. John was an extremely talented chef and baker where he was previously employed at Bennigans and Galloways prior to starting his own business, Let us Cater for You. He will be remembered by many for his generous spirit and pleasant personality. In addition to his father, John leaves to mourn two sisters, Ernestine “Tina” Johnson Morrison and Roslyn “Jean” Robinson; two brothers, Jerry Collins (Denisa) and David Collins (Donna), all of Johnson City, as well as a host of nieces, nephews, aunts, uncles, cousins, and friends. The visitation will from 4:00-7:00 P.M. Friday, November 8, 2019 in the East Chapel of Appalachian Funeral Home. The service celebrating John’s life will be held the 11:00 A.M. Saturday, November 9, 2019 at First United Methodist Church, 900 Spring St. Johnson City, TN 37604. In-lieu-of flowers, the family requests donations be made to the funeral home to assist the family with John’s final expenses.

The family of John R. Collins II created this Life Tributes page to make it easy to share your memories.

Send flowers to the Collins family.