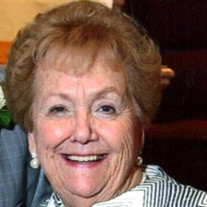 “Great is Thy Faithfulness, Oh God My Father” Jessie Orr Street, 89, Johnson City, died unexpectedly Friday, June 12, 2020, at Lakebridge Healthcare Center, following a brief illness. Jessie was a native of Roan Mountain and had been a resident of Johnson City for most of the past sixty years. She was a daughter of the late Robert Wiley and Cordelia Radford Orr. Jessie was a 1948 graduate of Cloudland High School, and a homemaker. She was an outstanding athlete and player on the Lady Highlander Basketball Team. Jessie loved the church she grew up in, Roan Mountain United Methodist, which she attended until moving to Johnson City, when she transferred her membership to East Pine Grove Park United Methodist. Jessie loved her family and remained close with her mother, brothers, sisters and grandchildren. She was a wonderful mother and example of strength, faith and encouragement. Jessie was an excellent cook and her chocolate cupcakes were a family favorite. In addition to her parents, she was preceded in death by her husband, Kale Street, in 2012, a son, Jim Street, a granddaughter, Megan Street, a daughter-in-law, Betsy Thomas Street, two brothers, Bill Orr and John Orr, two sisters, Ruth Orr Honeycutt and Frances Orr Tatum. Jessie is survived by one son, Tony K. Street and wife Joan, Johnson City; two granddaughters, Jenna Street Smith and husband Mike, Knoxville, Morgan Street, Johnson City; one great-grandson, Thomas Street Smith, Knoxville; several nieces and nephews. The funeral service for Jessie will be conducted Tuesday, June 16, 2020, at 10:30 A.M., from the East Chapel of Appalachian Funeral Home, with Rev. Ken Lytton, officiating. Interment will follow in Hampton-Orr Cemetery, Roan Mountain. Pallbearers will be selected from family and friends. The family requests that those who prefer to make memorial contributions in Jessie’s name, please do so to Roan Mountain United Methodist Church, 284 Main St., Roan Mountain, TN 37687, or East Pine Grove Park United Methodist Church, 2215 E. Unaka Ave., Johnson City, TN 37601.

The family of Jessie Orr Street created this Life Tributes page to make it easy to share your memories.

“Great is Thy Faithfulness, Oh God My Father”

Send flowers to the Street family.