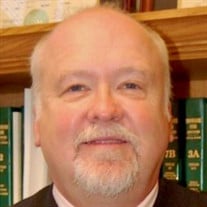 Judge James Arthur “Jim” Nidiffer, 66, Johnson City, passed away Monday, September 7, 2020, following a brief illness of ALS. A native of Elizabethton, Jim was born April 2, 1954 to the late Arthur and Sylvesta Cornett Nidiffer. In addition to his parents, he was preceded in death by his son, James Garrison Nidiffer and several nephews and nieces. Jim is survived by his wife, Carrie Ellis Nidiffer, of the home; step-daughter, Addison Jones, of the home; sisters, Lou Nidiffer and Carolyn Bowers, Johnson City; mother-in-law, Joyce Turner, Jonesborough; sisters-in-law, Julie Manley (Tommy), Amy Brown (Chad), and Laura Jones (Travis) all of Jonesborough; aunt, Peggy West, Kingsport; several nieces, nephews, cousins; special care giver and cousin, Cindy Crawford of Kingsport, who faithfully attended to Jim during his illness; fur baby, Lillie, that he loved so very much and was by his side constantly. After graduating from Elizabethton High School, Jim received his undergraduate degree from East Tennessee State University and his Juris Doctor degree from the University of Memphis, Cecil C. Humphreys School of Law. He was admitted to the Tennessee Bar in 1979. Jim started his career in 1980 with Attorney, Bernard H. Cantor and Associates, where he continued to practice law until he started his private firm where he practiced until 2006. From 2000-2006, Jim was an Associate City Judge, Johnson City Municipal Court. In 2006, Jim was elected Judge for Washington County General Sessions Court, and in 2014 was re-elected for a term that would have expired in 2022. He held that elected position until February, when he stepped down from the bench to concentrate on treatment for his illness. Jim also served as a judge for Washington County Juvenile Court. Jim had received many awards and was involved in many associations. He received the Frank G. Clement Community Service Award, Heroes in the Fight Community Supporter Award, Heroes in the Fight Award, 2007, the National Alliance for the Mentally Ill Model Project Award, and 2010, the Moral Kombat Hero Award. He also was involved with Civil War reenactments. Every Memorial Day and Veterans Day, Jim made it his mission to ensure flags were placed at the homes of veterans from the area. He loved riding his motorcycle, taking care of his yard, and spending time with his family, friends, and co-workers. Jim was of the Baptist faith. At the end of this journey Jim was ready to go and be with his beloved son, Garrison, in Heaven, telling Carrie that he would wait on her to join him in God’s heavenly home. During his illness, Jim received many cards and letters to encourage him on his ALS journey. Jim was often discouraged, but was uplifted from the many thoughtful and kind words he received. Every card or letter expressed how Judge Jim Nidiffer had encouraged them in their careers, a mentor to the young attorneys that were starting in their careers, and the reason that they were where they were because of him. They also expressed he had set a prime example of being fair and caring at the same time being a positive support in our community. His co-workers often visited Jim, talking through the window, due to the COVID-19 virus. These gestures helped Jim face each day with hope and courage. A special thank you to his doctors, Dr. Keith Cook, Dr. Christopher Pendola, Dr. Joe Reid, and Dr. Dean McLaughlin for their compassion shown to Jim during his illness. David Verble (ventilator care), Bob Feick, Ballad Hospice, Hospice nurse, Darian Cobble, and caregiver, Sarah Caldwell. At Jim’s request, a private service will be held at the Washington County Memory Gardens Mausoleum, with Dr. Kevin Morris, officiating. Special music will be provided by Jim’s family, Heavenly Reflections. Pallbearers will be Tommy Manley, Chad Brown, Garrison Brown, Travis Jones, Russell Kloosterman, and Doug Crawford. Honorary Pallbearers will be LeRoy Tipton, the Honorable Robert Lincoln, the Honorable Don Arnold, Bob Feick, members of the Washington County Sheriff Department, Jonesborough and Johnson City Police Departments, and the Tennessee Highway Patrol. In-lieu-of flowers, please make contributions to Abounding Grace Baptist Church Building Fund, 1025 Depot St., Jonesborough, TN 37659, in memory of Judge James Nidiffer. Memories and condolences may be shared at www.appfh.net Appalachian Funeral Home & Cremation Services, Johnson City, is honored to serve the Nidiffer family. (928-6111)

The family of Judge James A. "Jim" Nidiffer created this Life Tributes page to make it easy to share your memories.

Send flowers to the Nidiffer family.