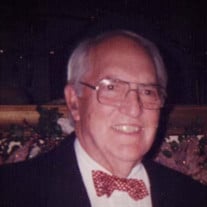 James R. “Jim”/”Buddy” Goode, 90, Johnson City, died Monday, September 7, 2020, following a brief illness with heart failure. Jim was a native and lifelong Johnson City resident. He was a son of the late William Gerald Goode, Sr. and Lillie Ross Hornsby Goode. Jim was a 1948 Graduate of Science Hill High School and received a Bachelor Degree in Economics from East Tennessee State College in 1952. He was a U.S. Army veteran, having served his country in the Korean War. Following his discharge from the service, Jim was employed with GMAC. He later worked for the United Stated Postal Service, where he was a mail carrier for thirty-five years. Jim was a member of First United Methodist Church, where he sang in the choir. He was also a member of NALC (National Association of Letter Carriers), the Johnson City V.F.W. Post #2108, and the Loyal Order of the Moose. In addition to his parents, Jim was preceded in death by his wife, Nancy Ann Roberts Goode, in 2008, his sister, Jacqueline JoAnna Goode Anderson, his brother, William Gerald Goode, Jr., and his step-mother, Ollie Miller Goode. He is survived by his daughter, Becky Goode Jones and husband Bob, of Boones Creek; granddaughter, Dr. Heather Jones Cook and husband Lafe, of Kingsport; great-granddaughter, Piper Cook, of Kingsport; Jim’s extended family- sister’s-in-law, Mrs. Billie Clark Leho & family, Norton, VA, Mrs. Thelma Roberts McLemore & family, Austin, TX, Mrs. Josie Roberts & family, Enterprise, AL; the Anderson families of NC & SC. Special thanks to nephew, Jim & Phyllis Clark; special friend, Jackie Shoun Ringersma, and numerous family & friends continued love & support during these last few months. The graveside funeral service will be conducted Monday, September 14, 2020, at 1:00 P.M., in Mountain Home National Cemetery (Historic Site), with Chaplain Steven Spell, officiating. Military honors will be accorded by members of the Carter County Honor Guard. Pallbearers will be selected from family and friends. Those planning to attend are to meet at the cemetery by 12:50 P.M. Monday. The V.A. enforces social distancing and requires all attendees wear a mask, those who do not wish to adhere to these guidelines will be asked to remain in their vehicle. In lieu of flowers, please send donations to support your local animal shelter needs, as Jim took in several cats to care for over the years.

The family of James R."Jim"/"Buddy" Goode created this Life Tributes page to make it easy to share your memories.

Send flowers to the Goode family.