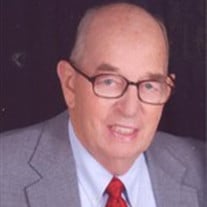 James Russell Armentrout Born on May 9, 1931 at Wilcoe, West Virginia, he passed away at home in Gray on October 6, 2016. He was a graduate of Max Meadows High School, in Max Meadows, VA; and earned a bachelor's degree from East Tennessee State College and a master's degree from the University of Virginia. He is survived by his loving wife of sixty-four years, Helen Matherly Armentrout; his son, Russell Armentrout (and wife Linda) of Rutherfordton, NC; and his sister, Margaret Carper (and husband Charles) of Colonial Heights, VA. He is preceded in death by his parents, William S. and Bess Danner Armentrout; two brothers, William V. "Jake" Armentrout (and wife Lavonia) of Decatur, AL, and Olin Armentrout (and wife Rowena) of Max Meadows, VA; and two sisters, Frankye Armentrout of Wytheville, VA, and Allene Collins (and husband Charles) of Abingdon, VA; several nieces and nephews. Jim was a pilot in the U. S. Marine Corps, attaining the rank of Captain. His flying included propeller and jet type dive bombers, and helicopters. His experiences included aircraft carrier operations, participation as a jet pilot in several nuclear bomb training blasts and serving as a helicopter pilot for President Eisenhower and Prime Minister Churchill. He was selected for service as a test pilot but sidelined due to a medical problem that resulted in his early retirement for physical disability. After his Marine Corps career, he was an educator in Prince William County, Virginia where he taught mathematics and physics, was a Guidance Director, Assistant Principal, and served a short term as Middle School Principal, spanning more than thirty years of service. He was the first teacher of a racially integrated classroom in Prince William County, Virginia (Gar-Field High School - September 1961). He was a founding director and corporate secretary for the Prince William Savings and Loan Association, it's subsidiary and subsequent corporations for over twenty-five years. During his tenure, that institution grew from its beginning to over a billion dollars in assets, and was last known as Ameribanc Savings Bank before it was purchased by First Union Bank in 1993. He was a member of St. Paul United Methodist Church in Woodbridge, VA for nearly forty years and of Gray United Methodist Church in Gray, TN from 1994 until his death. In both these churches, he served on various committees, most often in finance and trustee positions. He served on building committees for the sanctuary of St. Paul UMC, completed in 1963, and for the sanctuary at Gray UMC, completed in 2003. He taught Sunday School classes at both churches for more than thirty-five years. He was a recognized for over twenty years of service to the Boy Scout program at St. Paul UMC. He was a member of The Retired Officer's Association and the National Naval Aviation Museum, and a photo of him piloting a Marine helicopter in an offshore rescue was featured at the Smithsonian's National Air and Space Museum for several years. The family will receive friends on at Gray United Methodist Church on Sunday from 3:00-5:00 PM , followed immediately by the funeral. A graveside service will be conducted on Monday at Monte Vista Memorial Park with military honors; family and friends will assemble at Appalachian Funeral Home at 11:30AM. Pastor Lloyd Jones will officiate both services. Pallbearers will be Mark Armentrout, Bryan Carper, Bill Collins, Joe Covert, Tag Glenn and Floyd Robertson. Honorary pallbearers will be the Open Fellowship Sunday School Class of Gray UMC. The family would like to thank the staff of the Life Care Center in Gray; Mountain States Hospice; and especially home health care providers Joe Covert and Bonna Moyer. In lieu of flowers, donations may be made in memory of James Armentrout to "Gray United Methodist Church (Building Fund)," Memories and condolences may be shared with the family at www.appfh.net. Appalachian Funeral Home and Cremation Services, 800 E. Watauga Ave., is serving the Armentrout family. (423)928-6111 Order Flowers Service DetailsSunday, October 9th, 2016 5:00pm, Gray United Methodist Church Interment DetailsMonte Vista Memorial Park

James Russell Armentrout Born on May 9, 1931 at Wilcoe, West Virginia, he passed away at home in Gray on October 6, 2016. He was a graduate of Max Meadows High School, in Max Meadows, VA; and earned a bachelor's degree from East Tennessee State... View Obituary & Service Information

The family of James Russell Armentrout created this Life Tributes page to make it easy to share your memories.

Send flowers to the Armentrout family.