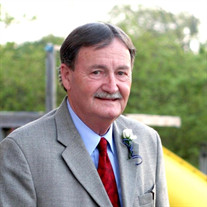 Reverend Howard W. Summers, 82, of Sulphur Springs passed away Monday, October 5, 2020 at his home following a brief illness. Howard was born in Arkansas City, KS and raised in Blackwell, OK. Over the years he made his home in Ponca City, OK, Wichita, KS, New Orleans, LA, Picayune, MS, and Gulfport, MS before residing in Jonesborough for the past year. He was a son of the late Harry and Erma Summers. A veteran of the U.S. Army, Howard became general manager of United TV & Furniture Rental in New Orleans, where he worked for many years until a life-changing encounter led him to answer the call to ministry. Howard then served as a pastor for over twenty-five years and was ordained by the Assemblies of God church. Most recently he attended Jonesborough Church of God. Howard loved to study the Bible as well as play guitar and sing. He never met a stranger and was always eager to find a connection with anyone he might strike up a conversation with. Though never a full-time profession, animal husbandry was a hobby that was dear to his heart. He is remembered as a man of great faith and character. In addition to his parents, Howard is preceded in death by his eldest grandson, Joshua Stockstill, and two brothers, Marvin and Delmar Summers. He is survived by his wife of sixty-two years, Thelma Summers; children, Mark Summers and wife Rhonda (Hutto, TX), Julie Stockstill and husband Steve (Jonesborough, TN), Greg Summers (Ponca City, OK), Trevor Summers and wife Jennifer (Waxahachie, TX), Amy Nix and husband Shannon (Euharlee, Georgia), Benjamin Summers and wife Tammy (Cypress, TX); twenty grandchildren; thirteen great-grandchildren; and numerous nieces and nephews. The funeral service will be held Thursday, October 8th, 2020 at 11:00 a.m. at Jonesborough Church of God, with Reverend Mark Summers officiating. The graveside committal service and interment will follow in Sulphur Springs Cemetery. Howard’s grandsons will serve as pallbearers. Those planning to attend services are strongly encouraged to wear a protective face mask and practice social distancing.

Reverend Howard W. Summers, 82, of Sulphur Springs passed away Monday, October 5, 2020 at his home following a brief illness. Howard was born in Arkansas City, KS and raised in Blackwell, OK. Over the years he made his home in Ponca City, OK,... View Obituary & Service Information

The family of Howard W Summers created this Life Tributes page to make it easy to share your memories.

Send flowers to the Summers family.