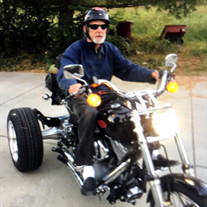 Hiram R. “Mud Flap” Ollis, 67, Johnson City, passed away Friday, March 20, 2020, at the Johnson City Medical Center after a courageous battle with lung cancer of nearly four years. Hiram accepted Jesus Christ as his personal Savior while battling his cancer under hospice care. He is now riding his Harley Tryke, which he built with his friend Chris, on the golden streets of glory. Hiram was a native of Johnson City, where he lived most of his life, and a son of the late Jack O. Ollis, Sr. and Ruth Hampton Ollis. He was a former truck driver, both long haul and construction, and most recently drove a dump truck for Williams Brothers Trucking. Hiram was a member of Austin Springs United Methodist Church, Johnson City. In addition to his parents, he was preceded in death by a daughter Rebecca, and several aunts and uncles. Hiram is survived by a daughter, Rachel Ollis, Jacksonville, Fl., sister, Bess Ricker, Johnson City; brother, Jack Ollis, Jr. and wife Betsy, Jonesborough; granddaughter, Leslie Silvia and husband Terrence, Springfield; grandson, TJ Arnett and wife Melanie, Elizabethton; great-grandchildren, Cheyenne, Easton and baby girl Kendell,to be born later this year. He is also survived by several aunts, an uncle, many cousins and special friends Chris, Finn, Mike and “Psycho”. The family would like to thank all those who cared for Hiram on the 4200 wing at the Johnson City Medical Center, especially Makayla, Shane, Eddie, Lori and Jenna. The family will always remember the love and concern shown to him by all those who cared for him. A special thank you also to Dr. Spradling, Dr. Rehman, Dr. Floyd, Gale, Cynthia and all those who took such good care of him at the cancer center. The family would also like to express their deepest gratitude to all the wonderful nurses there who administered his treatments as he battled the cancer. It was Hiram’s request to be cremated and to have no formal services. Memorial donations in his name may be made to Austin Springs United Methodist Church, 726 S. Austin Springs Rd, Johnson City, TN 37601.

The family of Hiram "Mud Flap" Ollis created this Life Tributes page to make it easy to share your memories.

Send flowers to the Ollis family.