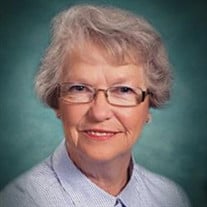 Geri Collins, 81, Jonesborough, died Tuesday, May 4, 2021, at the Johnson City Medical Center, following a brief illness. Geri was a native of the Boones Creek Community and a lifelong resident of Washington County. She was a daughter of the late Charles Edward and Mary Alice Gardner Martin. Geri was a 1957 graduate of Boones Creek High School. She spent most of her career as an Administrative Assistant and bookkeeper in banking, with Hamilton Bank, Banking and Trust, and the V.A. Credit Union, then with Warren Broyles and Roadrunner Markets, later retiring from Atmos Energy in 2005. Geri was of the Christian faith, and most recently attended Sullivan Baptist Church. She enjoyed square dancing, and was a former member of Gray Squares. In addition to her parents, Geri was preceded in death by four brothers and sisters-in-law, Ed Martin, Ralph & Grace Martin, D.C. & Mary Martin, Walter & Margaret Martin, four sisters and brothers-in-law, Ruth Martin, Pearl & Vernon Saylor, Minnie Belle Sanders, Beulah & Harvey Barker. One nephew, Lee Saylor. She is survived by her loving husband of fifty-five years, Kenneth Collins; sister-in-law, Marian Martin, Kingsport; brother-in-law, Clifford Sanders, Gray; several nieces and nephews; her precious dog, Cassie. The funeral service will be conducted Sunday, May 9, 2021, at 2:00 P.M., from the East Chapel of Appalachian Funeral Home, with Pastor Jeff Strong, officiating. The graveside committal service will follow at the Mausoleum Portico of Washington County Memory Gardens. Nephews and great-nephews will serve as pallbearers. The family will receive friends prior to the service from 1:00-2:00 P.M. Sunday in the East Parlor of the funeral home. It is recommended that those in attendance wear a mask or protective face covering, and continue to practice social distancing.

Geri Collins, 81, Jonesborough, died Tuesday, May 4, 2021, at the Johnson City Medical Center, following a brief illness. Geri was a native of the Boones Creek Community and a lifelong resident of Washington County. She was a daughter of... View Obituary & Service Information

The family of Geri Collins created this Life Tributes page to make it easy to share your memories.

Send flowers to the Collins family.