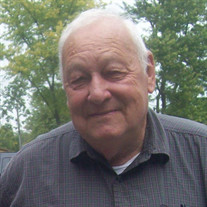 Lt. Col. George E. Boy, 87, Boones Creek, died Thursday, January 30, 2020, at his residence surrounded by his loving family, following a brief illness. George was a native and lifelong resident of the Boones Creek Community. He was a son of the late George L “Fay” and Blanche Roland Boy. George was graduate of Boones Creek High School and attended E.T.S.U. before receiving his B.S. Degree in Business from Steed College. He worked for the U.S. Government Department of the Army as a Military Technician, retiring in 1992 with over thirty-five years of service. George was a U.S. Army veteran as well, serving his country during the Korean War. Following his discharge from active duty, he continued to serve in Army Reserves and National Guard, retiring as Lieutenant Colonel with over forty years of service in the armed forces. He then served fifteen additional years with the Tennessee State Guard. George was a member of Snow Memorial Baptist Church where he served as a Deacon for over forty years, and a member of the Retired Officers Association. He loved being in and around water, especially Boone Lake, where he enjoyed boating and water skiing, and loved teaching others how to ski. In addition to his parents, George was preceded in death by his brother, James William “Jay” Boy, and two sisters, Daris Boy Martin and Betty Ann Boy. He is survived by his wife of over fifty-three years, Laura Denny Boy; three sons, George Robert “Robby” Boy and fiancé Sharon, Chris E. Boy, and Jonathan K. Boy, all of Boones Creek; one sister, Joyce Boy Hamilton, Bristol; three grandchildren, Jacob Robertson Boy and Sophia Elizabeth Boy, both of Simpsonville, SC, Dylan Lynn Boy, White Pine; several nieces and nephews. The funeral service will be conducted Sunday, February 2, 2020, at 5:00 P.M, from the East Chapel of Appalachian Funeral Home, with Rev. Tim Adkins, officiating. The family will receive friends prior to the service from 3:00-5:00 P.M. in the funeral home parlor. The graveside committal service will be held Monday at 11:00 A.M. in Monte Vista Memorial Park. Military honors will be accorded by the Carter County Honor Guard and members of the Tennessee Army National Guard. Pallbearers will be Jason Poteat, Chris Widener, Gerald green, Tony Slaughter, Jeff Shipley and Jeff Larimer. Those planning to attend are to meet at the cemetery by 10:50 A.M. Monday.

Lt. Col. George E. Boy, 87, Boones Creek, died Thursday, January 30, 2020, at his residence surrounded by his loving family, following a brief illness. George was a native and lifelong resident of the Boones Creek Community. He was a son of... View Obituary & Service Information

The family of Lt. Col. George E. Boy created this Life Tributes page to make it easy to share your memories.

Send flowers to the Boy family.