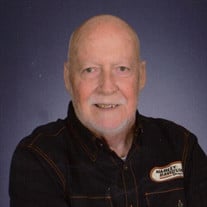 Gene Austin Deloach, 76, Johnson City, passed away Saturday, September 12, 2020, at his home following a long battle with cancer. Gene was a Carter County native and lived in Johnson City since he was a child. He was a son of the late William Thomas Deloach and Inez Winters Deloach Phillips. Gene was a 1961 graduate of Science Hill High School and received bachelor degrees from both ETSU and Tusculum College. He was formerly employed with the City of Johnson City as an Assistant Purchasing Director before going to the City of Elizabethton where he developed their first Purchasing Department, later retiring in 2007. Gene made many close friends while working in both city governments. After retiring, being the social butterfly that he was, took a part-time job at Lowe’s of Elizabethton. Then, after 7 years at Lowe’s he accepted a job at the Johnson City Memorial Community Center. In addition to his parents, Gene is preceded in death by his step-father, James R. Phillips, Sr.; brother, Jimmy Phillips; sister, Linda Phillips Joiner; father in law and best friend, Sam Street, Jr.; brother in law, Tim S. Street. Those left to cherish his memory are his wife, Brenda Street Deloach; son of whom he was very proud, Chad Thomas Deloach and wife Lori of Telford; daughter, Kim Owens; granddaughters, Hannah Elizabeth and Chloe Faith Deloach of Telford; grandson Drue Austin Deloach of Johnson City. He loved his grandchildren very much. Brother, Mike Phillips; sister Becky Taylor; mother in law, Ruth “Bootie” Street; sister in law, Kathy McKee and husband Wayne; brother in law, Mike Street and wife Kathy. His in laws were like his family. Several nieces and nephews as well as great nieces and nephews. Gene was a member of Keystone Freewill Baptist Church, where William “Bill” Greer faithfully pastored him, but was currently attending Milligan Freewill Baptist Church. At Gene’s request, there will be a Graveside Funeral Service at 3:00 P.M. Monday, September 14, 2020, in the Mausoleum Chapel of Washington County Memory Gardens, with Pastor Mark Street and Pastor Tony Birchfield, officiating. Those wishing to attend are asked to meet at the cemetery by 2:50 P.M. The family would like to thank all of Gene’s caregivers, especially the employees of Ballad Cancer Center, Dr. Elnora Spradling, and his best friend there, Cynthia Davis. All of the workers were such an inspiration to him and too numerous to name. Also, thanks to Dr. Jason Hatjioannou, Dr. Carlos Floresguerra and Dr. Joseph Lee and Amedisys Hospice. In-lieu-of flowers please donate to Milligan Free Will Baptist Church Building Fund, 1471 Milligan Hwy. Johnson City, TN 37601, or The American Cancer Society 871 N. Weisgarber Rd. Knoxville, TN 37909.

Gene Austin Deloach, 76, Johnson City, passed away Saturday, September 12, 2020, at his home following a long battle with cancer. Gene was a Carter County native and lived in Johnson City since he was a child. He was a son of the late William... View Obituary & Service Information

The family of Gene Austin Deloach created this Life Tributes page to make it easy to share your memories.

Send flowers to the Deloach family.