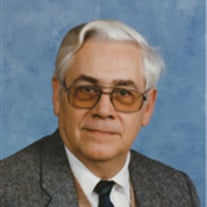 G. Richard Phillips, son of George W. and Francis Hieronymus Phillips, was born on the family farm two miles west of Atlanta (Logan County), IL, on August 30, 1930. On June 19, 2015, at his home in Unicoi County, TN, he, in the words of his British theologian teacher, William Robinson, "joined the majority." He was preceded in death by his two older brothers, William K. and Byron Jerome Phillips. After he completed 8th grade in Atlanta, his family moved to Pontiac, IL, where he completed high school in 1948, having been active in journalism and drama. Enrollment in what is now called Lincoln (IL) Christian University followed to prepare for Christian ministry; he completed the AB (Summa cum Laude) and ThM degrees in 1952. Study at Butler School of Religion (BD cum Laude in Greek and Hebrew, 1955) and Butler University, Indianapolis (MA, 1958) followed, with student ministries at Christian Churches in Nebo, IL, and Boswell, IN. December 20, 1951, G. Richard was married in Lincoln, IL, to Rebecca R. Brumett of Sullivan, IN. Their son, Richard W., was born late in 1952, and a daughter, Jane Ellen, followed in 1958. In late 1957, the family moved to East Ridge (Chattanooga), TN, to the ministry of East Ridge Christian Church. In 1959-1961, residence requirements and qualifying examinations for the PhD at Vanderbilt University were completed; the dissertation was completed in 1968, and the degree awarded. Post-doctoral study was at Union Theological Seminary (NYC), Columbia University, and University of Chicago. Later study 1971-1975, while teaching full load, resulted in the awarding of the J.D. degree from University of TN, and admission to the TN bar. In 1962, GRP was called to the faculty of Lincoln Christian Seminary, and remained in that position until 1967, when he began teaching at Milligan College. He retired from that position in 1992 as Professor of Bible and Chair, Area of Humane Learning. Milligan College awarded him its Fide et Amore in recognition of his service. During that teaching career, occasional teaching at East Tennessee State University (ETSU) and Emmanuel Christian Seminary followed. Four different times (1979, 1986, 1989, and 1995), GRP was invited to serve for a semester as visiting lecturer at the Theological College of New South Wales Churches of Christ, in Sydney, Australia. In 1956, GRP was commissioned as a chaplain in the US Air Force Reserve, and served for nearly 34 years in various Air Force Reserve and Air National Guard positions. For 16 years, he was chaplain for the 183d Tactical Fighter Group of the Illinois Air National Guard; from there he was selected for the pilot ANG liaison position in the office of the Tactical Air Command Chaplain 1979-1982, and from 1982 until retirement in 1990, he served in the Budget and Logistics Division of the office of the Chief of Air Force Chaplains in Washington, DC. Upon retirement from the Air National Guard in 1982, he received a state promotion to Chaplain, Brigadier General, and was given the Illinois Award of Merit. And at retirement from the Air Force Reserve in 1990, he was awarded the Legion of Merit, climaxing several other previous awards. Dr. Phillips is survived by his wife of 63 years, Rebecca, son Richard W. (Lucy), former President of the Southern College of Optometry in Memphis, TN, daughter Jane Ellen, also of Unicoi, and was a special education teacher with degrees from Chapman University, four grandchildren, and five great-grandchildren. Children of son Richard include Melissa Phillips Reading, an attorney partner in an Atlanta, GA, law firm, Richard J., Washington County TN attorney, and Sarah E., nursing student. Etolia Brooke Torres is the daughter of daughter Jane Ellen and is an accountant and chief financial officer of The School at Columbia University in NYC. Services will be held at Grandview Christian Church, of which GRP was a member for nearly 50 years, at 6:00 PM on Monday, June 22, 2015, with a two hour visitation immediately prior. Burial will be in Atlanta, IL next weekend. In lieu of flowers, memorial gifts may be made to The G. Richard and Rebecca R. Phillips Faculty Development Funds at either Milligan College (P.O. Box 750, Milligan College, TN 37682) or Emmanuel Christian Seminary (One Walker Drive, Johnson City, TN 37601). Order Flowers Service DetailsMonday, June 22nd, 2015 6:00pm, Grandview Christian Church

G. Richard Phillips, son of George W. and Francis Hieronymus Phillips, was born on the family farm two miles west of Atlanta (Logan County), IL, on August 30, 1930. On June 19, 2015, at his home in Unicoi County, TN, he, in the words of his... View Obituary & Service Information

The family of Dr. G. Richard Phillips created this Life Tributes page to make it easy to share your memories.

Send flowers to the Phillips family.